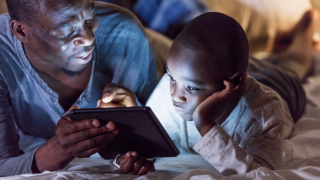 WASHINGTON—Technology is not making parenting any easier, whether it’s kids using it or the parents, according to a new study from Pew Research Center.

A majority of parents (66%) who have at least one child under the age of 18—as well as possibly having adult children—believe that parenting is harder today than it was 20 years ago. Among the top reasons why is technology, including dealing with the amount of screen time their children have access to.

PLUS: Researchers Find 1 Year Olds Spend an Hour Per Day Watching a Screen

Even while the World Health Organization issued guidelines in 2019 regarding the amount of time young children should spend in front of screens, 71% of parents with children under the age of 12 say they are at least somewhat concerned they might be spending too much time in front of a screen; 31% are very concerned. Interestingly, 84% of parents of a young child said they are either very (39%) or somewhat (45%) confident they know the appropriate amount of screen time for their child.

(Note: this study was conducted before the outbreak of COVID-19)

Even so, 61% of parents of children 11 or younger say they have received advice or information regarding screen time from a doctor or other medical professional.