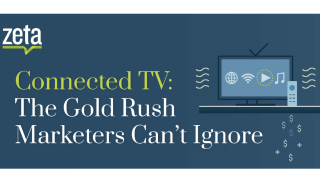 NEW YORK—More than seven in 10 Americans are watching video on a connected TV (CTV) device as the COVID-19 pandemic limits their opportunities for social engagement and summertime activities, according to data presented in an infographic released in June by data-driven marketing tech firm Zeta.

The growing popularity of CTV isn’t new. Since 2016, linear TV consumption has dropped 8.5% while that of CTV has grown 55%, according to the Zeta infographic.

However, the linear-vs.-CTV-viewing trend isn’t quite as cut and dried as the findings seem at first blush. Some of the most popular CTV services, such as Hulu, offer as many linear television channels in their premium subscription packages as traditional MVPDs.

The difference between linear TV and CTV offerings—at least when it comes to how Zeta tallies findings for its infographic—is in what the marketing tech firm chooses to emphasize in its definition of connected TV, says Christopher Hansen, senior vice president of product strategy.

In other words, Zeta’s distinction between linear and connected TV makes no provision to count in its linear category a linear channel, such as a call letter TV station delivered via an OTT service, but rather lumps it into the CTV category because of the way viewers consume it.

It’s sort of like not giving a linear TV channel credit for the audience it reaches in its DMA via MVPD services because those viewers don’t watch the station’s over-the-air signal.

What the distinction boils down to is how Zeta’s primary audience—marketers and advertisers—regard linear and CTV advertising opportunities, he says.

“If through Hulu, you are able to consume linear content and there’s an advertising or marketing opportunity at Hulu and you can address one [of the linear channels on Hulu] with an advertisement, that will take care of what’s needed from a marketer’s perspective,” he said.

Other Zeta findings presented on the infographic, include:

The meteoric rise in CTV viewing impressions via game consoles during the COVID-19 pandemic is the direct result of the hours people are using those devices to pass the time, says Hansen.

“The Xbox and the PlayStation have connected TV apps on them,” he says. “As millennials and Gen-Zers are connected and spending more time with those devices, you are starting to see them use those game consoles to watch TV.”

The infographic also identifies Roku as the No. 1 CTV set-top box with 72% of the market, followed by Amazon Fire Stick at 26%, Apple TV at 2% and Google Chromecast at 1%.

Hansen attributes Roku’s STB market-leading position to several factors. “If you are going to cord cut, and you are looking for a good price point, good usability and good adaptability to the ecosystem out there, Roku is the choice,” he says.

Among competitive connected TV brands, Samsung CTVs lead the pack with 72% using the sets to access connected TV services, followed by Sony at 20% and LG at 7%, according to the infographic.

The Zeta Connected TV infographic is available on the company’s website.