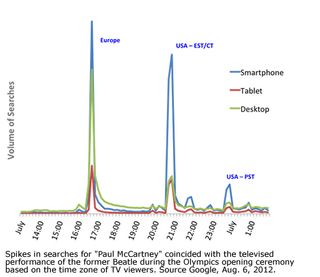 The 2012 Olympics are proving to be exquisite example of the complementary relationship the first screen can have with the second if newly released search statistics from Google are any indication.

An online posting from the Internet search giant Aug. 6 reveals viewers of games frequently engage with the competition across multiple platforms, like smartphones, tablets and computers at the same time they are watching the event on TV.

According to Dai Pham and Adam Grunewald, Google Mobile Ads Marketing, who made the posting, the London games are clearly “the first multiscreen Olympics.” The pair points to the opening ceremony of the games as a prime example of how people are picking up their smartphones or tablets to find out more information about the people they are watching on television. After crunching the numbers, Google found a spike in searches for ex-Beatle Paul McCartney during his performance of “Hey Jude,” which concluded the ceremony.

One of the significant things to note about the spikes Google saw in online searches for the former Beatle is their timing. Spikes were detected concurring with the performance by those searching in Europe. In the United States, where NBC delayed the ceremony spikes in searches for the former Fab Four member synced up with the East Coast and Pacific replay of the performance.

The spike in searches carries over to the athletic competition as well. The posting said, “… as users watch TV, or watch their laptops at work, they're searching for information about athletes, sports, events and records on their tablets and smartphones. In fact, at some moments during the Games, there have been more searches performed on tablets and smartphones than on computers.”

In Europe, mobile search volume was especially strong. According to the posting, one-third or more of Olympics-related searches in Europe were done with a tablet or smartphone. In the UK, the percentage of Olympics searches on mobile devices reached 46 percent. The search statistics also found that Japan led the mobile search spike with 55 percent. Australia recorded 45 percent of such searches on mobile devices, and South Korea saw 36 percent search with mobile technology, the posting said.