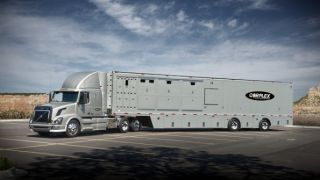 Corplex, a veteran mobile production company, has agreed to be acquired by NEP, the nation’s largest remote and studio production services company. The two companies expect the deal to be finalized in mid-December, when NEP will officially acquire Corplex's entire fleet of production vehicles including its three HD trucks: Chromium, Iridium and Platinum. Corplex helps produce live HD coverage for sports, corporate, news and entertainment events throughout the United States and Canada.

In the next six months, NEP will begin using Corplex’s Lake Bluff, IL, facilities as a regional hub for its Midwest operations, consolidating the assets of Corplex and Trio Video, another production company — based in Chicago, with four HD production trucks — that NEP acquired in March. Corplex's engineering and support staff will now join NEP's Mobile Unit division.

“We have worked together with NEP over the years and have always had a great synergistic relationship,” said Corplex president Scott West, who will oversee the integration of NEP and Trio Video assets into his company’s current location. “NEP is a very large company that does things well on a lager scale, and we’re a small company that provides a personal touch on a small scale. We thought that by combining the two organizations, we could really impact our customers and make things better from the big company with the small-company-type feel.”

West said they had been talking to NEP (and others separately) for several months before reaching an agreement to be purchased.

“The deal just seemed to make a lot of sense,” he said, adding that Corplex came into the negotiations from a position of strength, with business as good as it’s ever been. In fact, the company recently refinanced most of its debt and was looking to expand.

“We could have expanded on our own, but it seemed like the right time and the best opportunity for our company,” West said. “There were other things we could have done over the previous few years, but this was by far the best match for us.”

Mike Fernander, president and general manager, NEP U.S. Mobile Unit division, said the two companies have worked together for many years in some of the world’s largest mobile broadcast compounds.

“We know Corplex shares NEP's core values of delivering superior service, working together as one team, providing innovative solutions, and meeting commitments with integrity and passion.”

“As part of NEP, we'll be able to offer our clients access to the largest pool of resources in the industry,” West said, “including some of the leading technology experts and engineers in the mobile broadcasting field.”

Corplex was founded in 1985 as a broadcast engineering company and has since grown to become a major provider of live television production and distribution services. In 1998, Corplex designed and built one of the industry’s first all-digital mobile production units, and the company's commitment to innovation continues to be reflected today in the design elements of its Chromium, Iridium and Platinum 53ft expanding HD trailers backed by three graphics/support B-units.