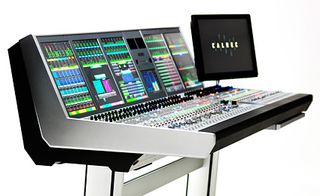 PITTSBURGH and HEBDEN BRIDGE, U.K.: Calrec Audio announced that NEP Supershooters bought two Calrec Artemis Beam mixing consoles for its all-Calrec fleet. The Artemis consoles will be installed in two new HD trucks that will get rolling in the spring. Supershooters has more than 60 OB units worldwide, and is Calrec’s oldest and largest U.S. customer.

Supershooters’ domestic fleet is deployed throughout North America, with occasional trips to Hawaii, South America, and Australia. The new Artemis consoles will be installed in ND 5 and ND 6, trucks that are bound for NHL hockey, golf, and other live sporting events on behalf of a major U.S. broadcast and cable network.

“Because the desks support the MADI interface, we can move up to 64 audio signals across one fiber/coax cable. So instead of running big, fat, heavy cables across a stadium, we can just run a few thin lines--which are sometimes already installed. It makes for easier setup and more elegant interfacing among audio consoles, routing switchers, and multitrack audio recorders,” said George Hoover, chief technology officer of NEP Broadcasting. “Plus Calrec consoles have the highest density of processing, which is important in a truck where you need a very powerful, capable desk in a very small footprint.”