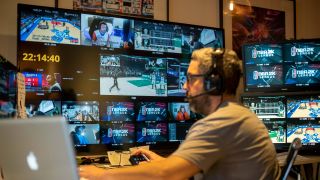 WATERLOO, Ontario—While the live-action version of the NBA congregated in a bubble in Orlando, Fla, to complete its regular season and playoffs, the esports NBA 2K League was forced to go the opposite way because of COVID-19, readjusting to all remote production with the help of Dejero.

Season three of the NBA 2K League was slated to feature 23 teams taking part in the esports competition from a studio in Manhattan. When New York was shut down because of the pandemic, the esports league shifted to a large-scale pan-North-America remote gameplay production model, combining live video feeds from 27 cities across the U.S. and Canada.

Dejero provided the league’s partner Dome Productions with a combination of EnGo mobile transmitters and PathWay rack-mounted encoders/transmitters to bypass security challenges from open source networks used by the teams at their homes as well as fluctuating bandwidth at the various locations. This helped form the sterilized  plug-and-play kits that were distributed to the teams for generating a reliable connection. Dome could configure the encoders/transmitters remotely, while operators were tasked with checking the connections in each location daily throughout the season.

As the season continues, the Dome Productions control room in Toronto receives, mixes and distributes live feeds with the help of Dejero’s WayPoint receiver. Meanwhile, the CuePoint return video server from Dejero ensures live commentary from two “casters” in Chicago and North Carolina. The broadcasts are directed and produced in real time from Vancouver.

Helping all of this is Dejero’s Smart Blending Technology, which simultaneously aggregates diverse wired and wireless IP connections from multiple sources to form a virtual “network of networks,” enhancing the reliability of connection paths, expanding coverage and delivering greater bandwidth, per Dejero.

“Dejero has allowed us to network the entire system and create a low latency game play and production value around all these local markets tied together remotely,” said Brian Carr of Dome Productions. “We have had a very successful third season so far despite the challenges we faced.”

NBA 2K League broadcasts are distributed live over Twitch, as well as being picked up by ESPN and SportsNet in Canada.