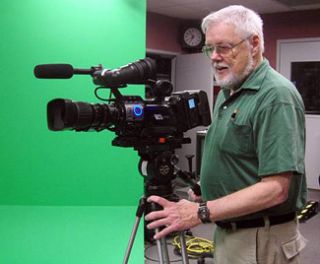 Volunteer Dick Terrill checks out a JVC GY-HM700U before a field shoot in one of MCM’s studios. Photo by Pat Thorpe.
Montgomery Community Media has acquired ten camcorders from JVC Professional Products Company as part of an overall facility upgrade to HD production.

Based in Montgomery County, Md., MCM replaced an aging fleet of DV-based EFP units with five GY-HM700Us and five GY-HM700UXT ProHD camcorders. Three of the ProHDs are slated for professional use while the other seven are for volunteers who produce a variety of community-based programs.

Pat Thorpe, MCM’s network and technical manager, stated in a press release his desire to run a tapeless workflow. Not only does it simplify the use of the camera, it also avoids the need for expensive media cards, of which the cost is the burden of the volunteers. The GY-HM700U model records to inexpensive SDHC cards while the GY-HM700UXTs can record to SxS media, a workflow which is streamlined further with the use of MCM’s Apple Final Cut Pro-based post facilities.

Programming from MCM covers all flavors, from documentaries to news, sports and special events. The group shoots native 720p in the field even though their broadcasts are delivered in standard definition. The purchase from JVC is part of an eventual changeover to full HD production.