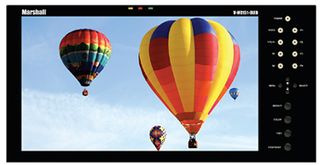 WASHINGTON
As the number of networks multiplies and content creators find new ways to tell stories, video monitors have moved out of the sterile confines of control rooms and into the real world. Monitors now go where the production staff goes, and that means monitors come in shapes, sizes and configurations demanded by video producers.

Marshall V-MD151-OLED monitor One thing is certain: CRT monitors are being pushed out of the production chain by various flat-panel technologies. You can still buy a CRT monitor for a special task but the end of the line is in sight for CRTs.

“I’d be hard-pressed to select a CRT over a flat-panel unit, even given the advantages conventional CRTs still have over LCDs in colorimetry and viewing angle,” said Jim Stanley, director of engineering for WLKY in Louisville, Ky. “As of now, we no longer repair CRT monitors; we replace them with flat-panels as they fail.”

Some of the new requirements from content creators include the need to critically monitor 3D in the field and in post production, as well as ultra-high resolution for monitoring 2K and 4K digital cinematography. Outside control rooms, monitors can be used anywhere by shifting groups of viewers, so wide viewing angles become important. Flexibility is also necessary, such as novel ways to mount and connect signals to monitors.

“In the past, we had precision monitors for critical applications, confidence monitors for where you just need to confirm a signal’s presence, and regular television sets for office and general off-air viewing,” Stanley said. “With the advent of flat-panels and HD, I think these distinctions have largely blurred. We use HDMI inputs on consumer-grade flat-panel sets [along with small SDI-to-HDMI converters] to provide low-cost monitoring that works surprisingly well for a variety of applications.”

With the success of recent 3D films, producing in 3D is getting major attention. In response, Panasonic recently introduced the BT-3D2550, a production-quality 25.5-inch 3D monitor with six color presets that include SMPTE, EBU, ITU-R BT.709 and D-Cinema. The BT-3D2550 is ruggedized to handle the rigors of field production.

“Most 3D displays are designed for viewing content in the home while the 3DL2500 provides production professionals with a rugged, high-quality display with the features, flexibility and I/O needed on set or in editing,” said Joe Facchini, vice president of media and production services for Panasonic Solutions.

The Vérité G-Series from JVC has two monitors to support standard 2D production, but with added flexibility. The 17-inch DT-V17G1Z and 24-inch DT-V24G1Z have built-in waveform/vectorscopes, audio level metering and LTC/VITC timecode support, among many features.

Several manufacturers have released professional monitors using organic light-emitting diode (OLED) technology, which has several advantages over typical liquid crystal display (LCD) designs. With an OLED display, the viewing surface is actually creating the light that forms the image, instead of using a backlight that LCD requires.

On the downside, OLED displays are more expensive to manufacture than LCDs, particularly at larger sizes, and the current technology for OLED generally has a shorter life than LCD monitors. OLED can also be susceptible to burn-in, so manufacturers use an “orbiting” technology similar to that on plasma displays.

Marshall Electronics has a wide variety of monitors in its Modular Design (MD) series, all of which have the ability to connect to a range of input signals depending on the supplied I/O modules. This includes composite, component, SDI, HDMI, DVI and even fiber-optic modules. For example, the Marshall V-MD151-OLED is a 15-inch desktop OLED monitor that can support any of the company’s input modules.

Ikegami is one of the few manufacturers that still makes CRT monitors, but its most recent monitor announcements have been for LCD models. One example is the HLM-1750WR, a 17-inch 1080p/60 display with a wide viewing angle and fast response time. It also works as a computer monitor.

“The HLM-1750WR features a USB port for transferring set-up files, wireless mouse control and auto-set-up probe connection,” said Alan Keil, vice president/director of engineering for Ikegami Electronics. “The space-saving rackmount design of the HLM-1750WR is another advantage for production control rooms, as well as inside mobile HD production vehicles.”

Wohler makes a number of flat-screen monitors, mostly for rackmount and portable applications. However, the Presto 1RU is something different: It’s a 16x1 routing switcher with a tiny OLED screen on each input button displaying the signal on that input.

“No longer do you have to guess if you are selecting the correct feed, bars or even black,” said Jeff McNall, director of product development for Wohler Technologies. “Within each selector button is an OLED video display that has great contrast, brilliant colors and no viewing angle barriers.”

As HD settles in as the standard for broadcast and production, nothing is more important than seeing exactly what is contained in your signals. A precision evaluation monitor can seem like a luxury when you have so many monitors with great pictures, but a precision monitor can show you at a glance what other monitors may hide.

The BVM-L231 23-inch critical evaluation LCD monitor from Sony has new optics and 3G input capability, and it is calibrated to SMPTE C, EBU and ITU-R.BT709 standards. It even has the ability to grab a still image in TIFF format from the displayed video, so that the image can be evaluated elsewhere.

For less-critical production applications, Sony’s line includes the PVM-740, a 7.4-inch OLED monitor for rugged field use. Typical of OLED monitors, its picture contrast is greater than a CRT display, and is less affected by ambient light—a special coating provides protection from scratches and enables a high transmission rate of the internal light source to keep the picture as bright as possible.

“Customers have been asking for the next great display technology, and for color correction and critical picture evaluation, OLED delivers everything they need and much more,” said Gary Mandle, senior product manager for professional displays at Sony Electronics.

The PRM-3Gb/s Precision Broadcast LCD series from Plura is built with a Grade A LED backlight LCD panel that provides accurate rendition of more than 1 million colors for monitor-critical applications. The monitors in this series also have wide viewing angles, on-screen waveform/vectorscopes, closed captions and audio metering.

As diverse as LCD and OLED monitors are, they still fall short of CRTs in at least one respect.

“Our plant, like many others, uses a mix of both standard-definition and HD signals, and the multisync capability of conventional CRTs makes a sharp picture in both SD and HD,” said WLKY’s Stanley. “Flat-panel monitors have a challenge with this, given the fact that their native resolution is fixed. A flat-panel monitor that could provide a truly sharp picture across multiple signal resolutions is something I’d really like to see.”

There’s a lot to see in monitors today and many choices to make. One thing is certain: Monitors have never been as capable as those available today. The needs of content creators have pushed video monitors to change in a variety of ways, from reduced power consumption to more input options to 3D capabilities.

With 3D, LED backlit models and OLED technology starting to move into the production mainstream, it looks like monitors will be interesting for some time.