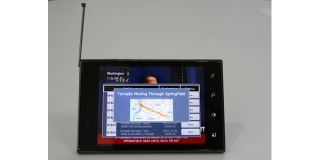 MINNEAPOLIS: First responders attending the annual conference of the Association of Public-Safety Communications Officials this week will get a chance to see how the new Mobile Emergency Alert System could be deployed. The APCO conference is focused on public safety communications, data security challenges, and emerging technologies. Around 5,000 people attend. The live M-EAS demonstration is taking place Aug. 21 at noon in the Presentation Theater at the Minneapolis Convention Center.

The new M-EAS is delivered via mobile broadcast DTV for delivery of rich-media alerts to mobile and handheld devices. Prototype LG mobile phones being demonstrated offer not only audio and visual indications of emergency alerts, but also include a vibrating mode to notify all users (including those who might be visually impaired) about an emergency. Tuesday’s demonstration will show how easy it will be for local TV stations to transmit mobile DTV signals with rich media emergency alert content for simulated national and local emergency scenarios, including a “suspicious package threat,” an “approaching tornado,” an “AMBER Alert” and “impending tsunami.”

The demonstration is being conducted with the support of the Public Broadcasting Service, LG, Zenith and Harris. LG Electronics developed the receivers; Zenith provided technical support and funding; and Harris Broadcast provided the signal exciters for TV stations to transmit the format.

“M-EAS easily overlays an entire metropolitan area with a signal that is not dependent on mobile wireless network infrastructure,” said John Lawson, executive director of the Mobile500 Alliance group of broadcasters. “It effectively bypasses bottlenecks caused by congestion and will deliver rich-media content to mobile phones, tablets, and APCO-25 standardized emergency responder radios.”

Using conventional TV broadcasts enhanced with data and mobile DTV transmissions, the M-EAS project will illustrate how the system delivers multimedia alerts to mobile DTV-equipped cellphones, tablets, laptops, netbooks, and in-car navigation systems, free of the type of congestion that can overcome cellular systems during emergencies.

“Our field trials effectively demonstrated that M-EAS can play an integral role in the future of public safety communications, and work is now under way to finalize the industry standard for M-EAS through the ATSC,” McCoskey said. “This life-saving enhancement to the ATSC Mobile DTV standard is expected to be standardized by early next year.”

The new alerting application developed during the pilot project capitalizes on existing standards for implementation. The U.S. broadcast standard for mobile television, ATSC A/153, uses Internet Protocol at its core. The use of IP allows the new application to be flexible and extensible. Data delivery, non-real-time delivery, and electronic service guides are all included. M-EAS is compliant with the international Common Alerting Protocol and designed for full incorporation into the U.S. Integrated Public Alert and Warning System.

Jay Adrick, vice president of broadcast technologies for Harris Broadcast noted that a similar system “saved thousands of lives when alerts went out during the Japan earthquake and subsequent tsunami last year.”