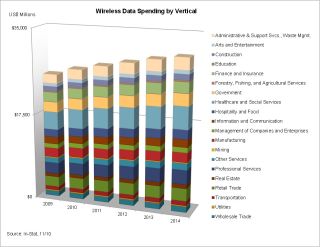 SCOTTSDALE, ARIZ.: The justification for reallocating TV spectrum for broadband is predicated in large part on anticipated growth in demand for wireless data traffic. That may not be the case across all usage segments. In-Stat says growth in wireless data spending by U.S. businesses will slow down in the next few years. The annual growth rate is expected to decline from 5.2 percent from 2009-10, when business are expected to spend $27 billion on wireless data, to around 2.5 percent during 2013-14.

Businesses accounted for around 63 percent of wireless data spending, based on the overall tally from the Telecommunications Industry Association. TIA said overall wireless data spending in 2009 reached $43 billion, and is projected to hit $93 billion by 2013. The projection yields an annual growth rate of 23 percent over five years.

The latest spectrum-demand white paper from the Federal Communications Commission states that “mobile data demand is expected to grow between 25 and 50 times current levels within five years,” or between 480 and 980 percent annual growth rate.

In addition to data spending, In-Stat looked at what U.S. businesses are spending on wireless handsets. A downward trend, from $4.5 billion this year to $3.2 billion in 2014, is expected. Wireless voice spending is expected to grow “a modest $600 million” from this year through 2014, In-Stat said.

TIA says wireless data will account for 44 percent of all wireless services in three more years, up 17 percent over 2009. The TIA anticipates a decline of wireless voice spending after a peak of $118.9 billion this year; receding to $117.7 billion by 2013.
-- Deborah D. McAdams