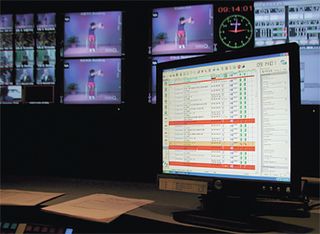 DALLAS—Master control automation—managing content and getting it on-air, on-time—is still evolving from its 1970's 2-inch tape cassette roots. Along with traffic & billing, it's the heart of a station's cash-flow and more crucial than ever in today's frenetic multichannel environment.

Snell Morpheus master control production system Once straightforward product distinctions now intersect with digital asset management, traffic, multi-destination distribution, and other broadcast business realities. While many NAB exhibitors offer it, only a few "Automation-'R-Us" companies have avoided assimilation by hardware-centric "we do it all" enterprises.

Trending-up: Consolidation, centralization, anything file or IT-based and channels-in-a-box. Slipping is BXF, perhaps along with our cherished notions of broadcast quality. As Fred Beck, president of Austin, Texas-based integrator Beck & Associates observes, "Historically, reliability and revenue have been two sides of the same coin; for the first time in my experience, broadcasters seem almost willing to sacrifice some reliability for operational savings."

Given today's economic pressures, plus the competition for viewers and spectrum, operators are anxious to "streamline and automate... to ensure maximum productivity from products and people," said Jason Salyards, automation product line manager at Harris. "Traditional boundaries are breaking down in an effort to 'do more with less'... roles and responsibilities are eliminated while others morph into hybrids."

Beck notes that station groups with call letters spanning multiple regions are "exploring master control consolidation; planning or working on regional or national hubs [for the] savings, but each with a unique plan or philosophy." Such plans are spurred by "more affordable network topologies that let geographically dispersed systems work like local ones," said Luis Muñoz, automation solutions architect for Avid. For Gary Stigall, CTO of San Diego-based SI TV Magic, it's all about lower cost and higher performance. "Customers expect tighter traffic integration and file-based systems capable of handling formats from the popular [content] delivery systems with less transcoding," he said.

Reduced manpower means a greater reliance on automation; buyers want solutions that are "simpler, more interactive and intuitive... able to make decisions with fewer manual touch points," says Shawn Maynard, vice president/GM of Florical in Gainesville, Fla. For Grass Valley, which recently acquired Dutch-based PubliTronic for multichannel automated playout, it's "the next level of efficiency and cost reduction; to minimize capital outlay, both upfront and for expansion," according to Charlie Dunn, executive vice president for products.

Smaller market clients of Rushworks, based in Flower Mound, Texas, also want cost-effective systems for subchannels and transitioning to HD. "With the economy flat, they must minimize investment and maximize ROI," says president Rush Beesley. For WideOrbit in San Francisco, which added automation to complement traffic at the 2011 NAB Show, the answer's simple: "Real automation—lights-out as much as possible—and cheaper!" asserts founder & CEO Eric Mathewson.

The urge-to-merge automation into traffic (or vice versa) hasn't taken wing. Blame the economy, a paucity of viable hook-ups, or perhaps the recognition that each is incredibly complex. That, and customers really do prefer best-of-breed choices and separation of functions. "We see tighter integration [but not] converging into one; they're too specialized and focused on different users," predicts Jonathan Goldstein, president of Snell Americas.

BXF, the much heralded SMPTE schema for facilitating bidirectional automation/traffic communication, doesn't appear to be an indispensible feature of the new broadcast station according to integrator Scott Griffin, principal and vice president engineering/technology for The Systems Group a Hoboken, N.J.-based systems integrator.

Mathewson concurs. "No product on the planet could have lived up to the hype when BXF first started," he said. "Most think of a 'live log,' but that's not compelling if [stations] have to change workflow... some aren't sure it's worth the trade-off. There's real value in a final deadline where you polish [and close] the log before it's shipped."

Gary Stigall, TV Magic CTO BXF looks like a great solution on paper, according to Ung. "A near real-time interface means more revenue opportunities and lower operating costs [but] the traffic interface is what broadcasters don't want to touch—it's one of the most important parts of the station; it takes a lot of effort for the interface to work properly."

File-based workflows add responsibilities and complexity to automation. They may be the new normal, but aren't yet fully implemented by most facilities.

Jason Salyards, Harris automation product line manager Manufacturers are cautiously optimistic. Florical's Maynard—promoting Acuitas alongside their conventional automation—calls the concept "the future of playout; a natural evolution from proprietary 'purpose-built' hardware to commodity-based solutions... [but] it's emerging and not yet an experienced technology."

Harris's Salyard points to "the promise of lower infrastructure costs by consolidating multiple components into a single box; they're bound to gain market acceptance under increasing pressures to drive [down] costs." However, "current products focus more on vendor competencies; less so the overall workflow."

Avid's Muñoz says "the systems [have] improved, but [are] still lacking the qualities found in best-of-breed solutions and fail to account for a customer's existing capital investment." From WideOrbit's perch, Mathewson sees compelling reasons for things to be IT-based versus machine control.

"'Channel-in-a-box' is a catch-all for something that currently doesn't exist," he said. "We're certainly walking towards a single facility solution where one piece of software manages 80-plus percent of the operation."

The "IT" bit is hardly new—automation has always involved databases and computers, either openly or under-the-hood. But how much of a critical system can be assembled from commodity components? It's the "two nines versus four" reliability quandary: Is the broadcast standard 99.99 percent or 99.9999 percent uptime?

A thornier question, perhaps is whether the category itself—and broadcasting as we know it—will exist in 5 or 10 years. While core master control tasks remain linear, the future is nonlinear, on-demand. Different ballgame, different rules and tools.