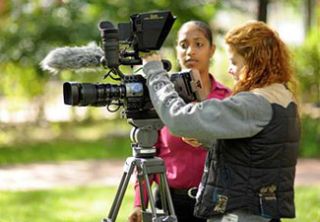 The cameras were originally obtained for use in the campus’ studio, but one was adopted for use in a one-week video production course titled “DV Intensive.” The course has a group of students start on a Monday morning with nothing, work through the week and have a completed project for screening Friday night.

According to Larry Banks, LIU College of Liberal Arts and Sciences Media Arts Department Chair, the camcorder’s file-based workflow is a real time-saver to the students in “DV Intensive.” Footage is recorded on affordable, non-proprietary SDHC cards and can be edited in Final Cut Pro immediately. “Direct-to-edit is wonderful,” Banks said in a press release. “It’s a very nice, simple workflow.”

The GY-HM750U features a 3-CCD imaging system, providing 1920x1080 images with the ability to record HD footage in 720p, 1080p and 1080i, as well as SD (480i). The camcorder also features include extensive image customization, a high resolution (1.22 million pixel) LCOS viewfinder and 4.3-inch flip-out LCD monitor and JVC’s patented Focus Assist functionality.