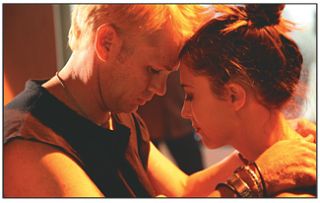 LOS ANGELES
In the indie feature “Rejouer,” a man suffering déjà vu in the extreme realizes that he is reliving the same day over and over again and must try figure out a way to stop this odd phenomenon. (The French “rejouer” translates as “replay.”) And while writer-director Liam Finn had experimented with consumer and prosumer production gear on his previous projects, this time around he wanted to push his experimentation even further by making an entire feature using a hybrid still/video camera.

As soon as Canon offered an HD video capability on its EOS 5D MK II DSLR and Nikon on its D90, many people rushed to experiment with them on short- and long-form productions. It has intrigued still photographers and videographers alike that it’s possible to get any kind of HD (or even pseudo-HD) out of a camera so compact and relatively affordable. But Finn and his colleagues—including cinematographer Mike Mickens and technical consultant Illya Friedman—ended up going to an even more modest end of the market for “Rejouer,” making use of Panasonic’s Lumix DMC-GH1.

Note that the GH1 is technically not a DSLR camera as it does not have a single-lens reflex design.

In the indie film, "Rejouer," a man suffering déjà vu in the extreme realizes that he is reliving the same day over and over again and must try to figure out a way to stop the phenomenon. A key production plan the three had come up with before settling on the Lumix was the notion of putting professional cine lenses on the front end of whatever camera they selected. Often, Friedman notes, people get very wrapped up in a unit’s sensor specs and ignore the importance of high-quality optics and a skilled focus puller.

Friedman, who had worked at the now-defunct Dalsa, which offered the Origin 4K camera, was able to obtain a set of lenses from that company—optics made of very high-quality glass and the product of the same designers who created the Panavision Primos.

“One thing that Panasonic did [with the Lumix] that was very smart,” Friedman says, “is that, rather than trying to come out with their own lenses to compete with Canon and Nikon, they decided to make the camera adaptable to pretty much any lens on the market.”

This is done, Friedman adds, through a series of adapters. But there were no such adapters for the cine-standard PL-mount lenses he had procured, so he designed his own patent-pending attachment, including the mount itself, and a system of rods to help prevent the relatively heavy lenses from damaging the lightweight Lumix.

The format of the Lumix provides “four times the image area of a 2⁄3-inch sensor,” Friedman notes. “This allowed for our standard [35 mm cinematography] wide-angle lenses to really have an even more extreme wide-angle look, and it also meant that depth of field was closer to what people expect from a motion picture than it is using a 2⁄3-inch HD camera.”

The GH1, listing for about $800 to $1,500 in the U.S., was available only in England and Japan last spring when the “Rejouer” team was gearing up for production, but it addressed a lot of issues that worried them about going down the Canon 5D route that they’d initially started on.

“The 5D MK II had issues about manual control while in movie mode,” Friedman says, noting that some of these issues have since been addressed in a firmware upgrade from Canon. “Also, the Canon is 30p and we wanted to end up at 24p in order to have the option of doing a film-out at the end. So we met up with respected post people who do format conversions and asked them how we can make 30p look like 24p, and the answer turned out to be, ‘You can’t.’ They told us, ‘If you start at 29.97 or 25, we can get you to 24, but 30 to 24 looks bad no matter how you slice it.’ So the Panasonic’s 24p was looking like a very good choice.”

“To me, any camera is really just a box with a lens on it,” says Mickens. “I’m not so concerned that this isn’t what I’m used to shooting with. I want to tell stories. I like that it’s the bleeding edge of technology, and I like that the camera has a flip-out monitor. That was very helpful for me and Liam to see what we were getting. The camera itself is extremely light, especially for any kind of handheld work, where you need a little heft to help steady the camera, so I was always looking for ways to add weight, like putting an Anton/Bauer battery under it.”

In testing the Lumix, Mickens discovered a significant difference between the ISO rating on the camera’s dial and the results he got based on his handheld incident meter. “The lowest we could crank it down to was 100 ASA,” he says. “But I found I could treat that like 640! I could light to ASA 640 and get the picture just right with the camera set at 100. So I essentially set the camera up as two ‘stocks’—100 ASA and 400 ASA, which was the highest speed we could use. But that wasn’t so bad because we could light with it at that setting as if we had 2500 ASA.”

He notes that in both case, he made sure to be careful with both the top and bottom end of the curve. “It could clip fairly easily with overexposure,” he says, “and it could quickly fall off to black if you didn’t fill in shadows pretty well.”

For all the benefits of this little camera, the filmmakers, after having used it, did have some notes for the manufacturer to consider in designing GH1 descendants. “I’d love to see them improve the compression,” Friedman says of Panasonic’s 17-megabit AVCHD codec. “Yes, it’s making 1920x1080 23.98 video with a lower data rate than MiniDV and HDV, so it can’t be perfect, but they tried to minimize this quality trade-off by not pushing on the compression scheme too much.”

The Rejouer production crew show the film using Panasonics's Lumix DMC-GH1. “If you shoot carefully, you can get a great image,” Mickens says, “but it’s also easier than with other compression codecs to make the image bad, so if you’re not conscious when you’re shooting, you can hurt yourself. If you have extreme unpredictable motion and a very bright, overexposed image, those things seem to be the magic combination to make it look terrible. The good news is that that’s not how people generally shoot.”

“There’s also not a lot of room to color correct,” Friedman adds. “It’s so heavily compressed that you really have to get the image right in-camera. There’s not that much you can do to it in post. It would also be nice if you didn’t have to extract your 24p from the 59.94 wrappers. When it’s still inside this AVCHD 59.94 [form], it has a nonstandard pull down, so motion looks funky on most computers. We could play back with a PlayStation 3 or the camera, but on a laptop you can’t really get more than about 15 fps.”

Mickens shot using economical SD cards, which were then converted via CineForm software into ProRes 422 files and dropped into Final Cut Pro for editing: “CineForm has an interpolation function to take the color space from the 4:2:0 of the camera file to 4:2:2. It’s not real 4:2:2, of course, but it’s a very good facsimile.��

For Finn, the process of making “Rejouer” was aided by the camera in obvious ways (low cost to purchase and use the camera, and cheap SD cards, to name a few) and some less obvious ones, too. “I wanted to make a big movie with a little camera,” he says. “That was the concept. I’ve been involved in the indie world for a long time and I’ve seen a lot of movies that are two people talking in a little room. Those movies can have their value, but I often get bored with them.”

Instead, Finn brought his actors to exterior locations all over the Los Angeles area, taking full advantage of the Lumix’s “incognito” form factor. “We shot on Van Nuys Blvd. with tons of people walking around and the actors doing their scene, and nobody on the street ever even looked at the camera,” Finn recalls. “Nobody even noticed. The crew was so small that people probably thought, ‘They’re just taking snapshots.’ We were in Echo Park and downtown L.A. and nobody had any idea we were making a movie.”