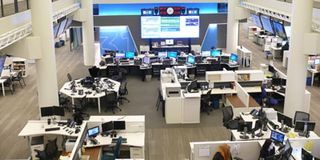 National Public Radio has moved its headquarters to a restored building in Washington DC and upgraded much of its existing gear to the latest digital audio technology from Lawo, based in Germany. NPR's "Weekend Edition Saturday" was the first program to broadcast from the new building in April of 2013, but the facility has continued to improve its infrastructure and various studios. NPR permanently closed its old headquarters at 635 Massachusetts Avenue, NW that same month.

NPR's new 440,000 sq. ft. building features a four-story 1926 warehouse, the façade of which was preserved, combined with a new seven-story office tower. As a producer and distributor of noncommercial news, talk and entertainment programming, the audio quality of NPR's programs is of the utmost importance. That's why Shawn Fox, Senior Director of Engineering at NPR, chose new audio consoles and other audio networking technology from Lawo.

"NPR needed to upgrade its broadcast and content production facilities in order to properly fulfill the transition from analog to digital technology," Fox said. "Our previous building was almost 20 years old and based on analog technology. Most of the equipment was still in service, but was outdated and constantly needed repair. NPR's content production had also evolved to incorporate new and exciting platforms beyond traditional broadcasting."

"The new 1111 North Capitol Building Project was more than just a facility wide system upgrade," he said. "Newer technologies were required in order to be more flexible, and to meet the ever-changing needs of a 24/7 news operation."

This includes the new Lawo equipment, which was selected because it all runs seamlessly on NPR's redundant corporate network, which is protected by multiple firewalls and runs on separated VLANS.

Among NPR's new audio gear is the Lawo large format mc²66 MKII production console, seen here with one of the new radio studios in background. Lawo and NPR have worked together in the past on smaller technology projects, such as facility upgrades at NPR's 635 Headquarters in the summer of 2009.

"These were small scale projects in preparation for the 1111 New Building project," Fox said, adding that the 1111 project and its relationship with Lawo started in in the summer of 2011. "Our new facility went operational on April 13th, and the entire project was completed in July 2013.

"The timeline on this project was extremely tight," he said. "In some cases, systems came online only weeks before the first broadcast. Lawo representatives were constantly on site and they met the requirements of the Engineering Client base expediently and with minimal negative impact to our stations and listeners."

NPR's new headquarters were designed by the DC-based firm Hickok Cole Architects, and built by Balfour Beatty Construction. The 440,000 sq. ft. building features a four-story 1926 warehouse, the façade of which was preserved, combined with a new seven-story office tower.

Where NPR's original headquarters was built around 1990s technology—tape machines and analog equipment—the new space features digital audio and technology such as mobile phones that the network said are now important news and content gathering tools.