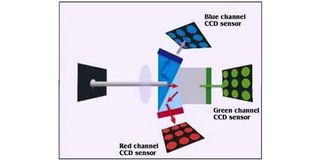 SEATTLE—Large-format, single-sensor cameras are touted for their high resolution, ability to mount cine lenses and to achieve the film-look shallow depth of field. But these LFSS cameras also present some design challenges and face some natural disadvantages to the long-serving 3-sensor camera design, a design which stretches back to the tube camera era and birth of color television.

THE MOSAIC EFFECT
In simple terms, a 3-sensor camera employs a beam-splitting prism that separates the image from the lens into the three primary colors, red, green and blue. The resultant red, green and blue images are delivered discretely to the three separate sensors. Each of those three sensors has the same number of equally spaced pixels.

A large-format, single-sensor camera employs, as its name suggests, a single sensor that is considerably larger than the largest sensors (2/3-inch) used in 3-sensor cameras. Rather than using a prism to separate colors, LFSS technology employs a mosaic color mask over the pixels on the chip, with minute filters painted over individual pixels so that some pixels receive only green light, some only red light, and some only blue light (see Fig. 1).

Though there are some other “mosaic”-ing schemes, most LFSS cameras today employ a Bayer pattern (Fig. 2), in the mask over the individual pixels. The Bayer pattern allows twice the number of pixels to receive green light as there are pixels receiving either red or blue light. This pixel count disparity is resolved by “de-Bayering” processing to achieve the RGB output. (The term de-Bayering is used in this article to describe the reconstruction processing for LFSS cameras, whether they use a Bayer pattern or some other pattern.)

“It takes a lot of math to achieve that,” said Juan Martinez, senior product manager, Sony Electronics. “You need to have an incredibly powerful digital signal processor.”

Larry Thorpe, senior fellow at Canon, agrees. “That’s probably the singular difference between the single-sensor camera and the 3-chip camera, in that the 3-chip camera has the beauty that it delivers immediately at 4:4:4,” he said. Each LFSS maker has its own proprietary algorithm that strives to deliver an image as close to 4:4:4 (uncompressed) as possible.

Michael Bergeron, senior business development manager at Panasonic pointed out that “using a mosaic filter, you don’t have co-sited pixels. In a 3-imager camera, the red, green and blue sub-pixel of each pixel is in exactly the same spot.” Part of the de-Bayering process involves divining what a blue pixel on a LFSS chip, for example, would capture in a location where there is actually a green or blue pixel.

Klaus Weber, director of product marketing, cameras at Grass Valley Germany, said this can be a problem when it comes to imaging fine color detail with an LFSS camera. “If you shoot very small colored objects, like small flowers or a bee, in front of green grass, for example, I think the de-Bayering process will generate a lot of artifacts, because the estimation will not work so well.”

As to the amount of power consumed by the two different designs, Weber rates the difference as a push. “I think the power consumption from a large, single imager CMOS camera compared to three 2/3-inch CMOS should not be so much different.” Where the single imager itself might use marginally less power than three separate imagers, most of what you save from the imager “you most likely will consume on the larger processing power which is needed.”

OTHER DIFFICULTIES
Another difficulty LFSS camera makers face is in the dyes used to create the mosaic mask over the single sensor. Thorpe said, “Two aspects of that: One is designing the material and shaping the spectral responses to do justice to what you’re seeking in terms of meeting colorimetric specs of high-definition television, or more challenging, the colorimetric specifications of DCI, the digital cinema initiative. And then there’s the issue of the stability of those pigments with time. Some are better than others.” The 3-sensor camera prisms face no such performance degradation over time.
Figure 2 LFSS camera designers are also forced to compromise in their use of a low-pass filter to prevent aliasing in the image. The lower the pixel-count for each individual color, the more severe the aliasing problem can be.

In a 3-sensor camera, because pixel-count on each chip is the same, a single low-pass filter is optimal for all three colors.

There are also obstacles to the 3-sensor camera design that are not experienced by LFSSs. “It’s really complicated because you have an optical block and three sensors,” said Sony’s Martinez. When black balancing or compensating for drift due to heat, for example, on an LFSS camera “you’re doing all the corrections on one sensor, not on three separate sensors.”

A prism design has optical considerations as well. “For the type of glass that’s used in the prism, it typically requires optical correction associated with it,” said Alan Keil, director of engineering at Ikegami. “That’s compared to just air, which is normally all there is [between the lens and sensor] in a single sensor camera.”

One other thing to consider is the lens size required to cover the large sensor of a LFSS. While in a cine application, an LFSS might be fitted with a prime lens or relatively short range zoom lens, in modern sports applications, a 100x zoom range lens is often employed. “A 100x zoom for a 35mm size imager would be maybe 100 kg [220 pounds], said GV’s Weber.

But as Keil pointed out, the modern 100x zoom lenses are designed to deliver sharpness for the high definition cameras they are mounted on. “If you increased resolution by a lot, those lenses might not be perfect enough.”

If the LFSS cameras seem like a niche product primarily designed for digital cinema production, it’s worth noting that Japan broadcaster NHK, a pioneer in the development of the Ultra High-Definition Television (UHDTV) format, announced last summer that it could begin broadcasting UHDTV in that country as soon as 2016.