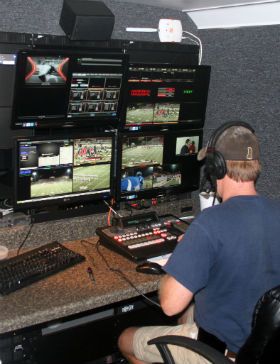 “We wouldn’t be doing this the old conventional way – it costs too much,” said Korey Wisland, KBVO production manager, who directs almost every local sports program. “The Granite makes it possible. With a larger production crew, the numbers don’t work.”

A typical setup includes two high cameras and two field cameras, plus one robotic camera in the booth controlled through the Granite. One crew member is responsible for video replay and audio, while the second handles directing, graphics and clips.

With a skeleton crew in the trailer, Wisland said Fluent Rapid CG 2 is a “critical” tool. “We have to use it for sports, especially ‘down and distance’ stats,” he explained. “It’s the only way we could keep up with the score.”