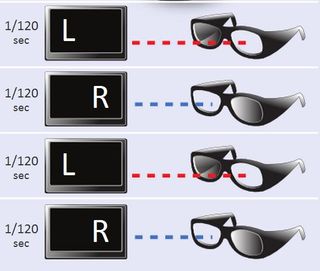 GENEVA, SWITZERLAND: The International Telecommunications Union, a global standards-making body, has issued a one-sheet presser on the basics of frame-compatible stereoscopic TV.

“It brings back the depth by showing slightly different pictures to each eye. This is closer to how we normally see things,” the illustrated presser reads. “Each eye's picture appears on the 3D TV screen, one after the other. Images are sent to the eyes at a rate of around 50-60 images per second, making the process imperceptible to the viewer. Special glasses make sure each eye gets the intended picture.”

The ITU notes that “not everyone can watch 3DTV comfortably. Those who experience discomfort should watch in 2D.”

That caveat is playing into a format discussion among European Union public broadcasters, who are leaning towards one that accommodates 3DTV on top of 2D transmissions.

The ITU is among several organizations working on 3DTV format standards, along with the Society of Motion Picture and Television Engineers, the Motion Picture Experts Group, the Consumer Electronics Association and the Advanced Television Systems Committee in the United States--among others internationally.

The ITU released a report last month updating its progress on 3DTV standards. Its Study Group 6, devoted to terrestrial broadcasting, is focusing on the process. Study Group 6, representatives of SMPTE and the EBU met in April to review 3DTV systems and the work being done in production and display. The Group determined that 3DTV would roll out first in dual-image stereoscopy, then move to a multi-view system and finally reach a third stage.

“The third generation will feature systems that record the amplitude, frequency, and phase of light waves, to reproduce almost completely human beings’ natural viewing environment. These kinds of highly advanced systems are technically some 15-20 years away,” ITU said.

Study Group 6 is tentatively scheduled to meet in Geneva Oct. 28-29.

The ITU’s update is at “3DTV- Three-dimensional television.”
The illustrated presser is at “3D Television”
ITU Study Group 6 progress reports are on its home page.
MPEG’s amended ABC/H.264 codec amended to include multivew coding, or MVC, is described in “Overview of MPEG Standards for 3DTV.”

Also see...
January 20, 2010: “Building a 3DTV Programming Guide”
“We’re trying to avoid floating the guide in front of the action. We discovered that it was an improvement to push the guide behind the screen and let the action play over it.”

January 20, 2010: “A 3DTV Update from the MPEG Industry Forum”
The emerging MPEG-4 MVC (multiview coding) scheme supports the simulcast of independent, left-eye/right-eye views. A technology enhancement dubbed “frame packing arrangement and SEI message” enables the encoder to tell the decoder how to extract two distinct views from a single decoded frame. This could be in the form of side-by-side or over-under, or “split-beam” images, two forms of stereoscopic display.