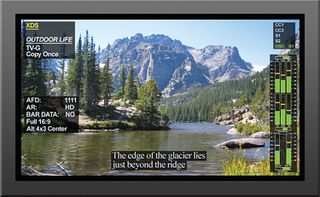 HAMILTON, N.J.â€”Since closed captioning was introduced in the 1980's as a service for the deaf and hearing impaired, TV shows are now broadcast in multiple standards as well as via the Internet and Mobile DTV.

EEGâ€™s DE285 provides full-resolution HD graphics overlay of all 608 and 708 CC services, plus monitoring of audio peaks and other ancillary data. Given that closed caption text must reflect the spoken word, captions must be edited to match program content whenever it's repurposed. Captions must also comply with existing regulations, as well as pending legislation such as the "21st Century Communications and Video Accessibility Act," which requires closed captioning on devices that display video delivered over the Internet, among other provisions (see "SMPTE Champions Online Captioning," June 22). Since failure to comply with regulations could result in fines, broadcasters have been looking for more efficient ways to deal with captions as their programming expands.

Besides being embedded in the video, "Caption information can now be delivered as or captured live into a data file for later encoding on any video or play-out server," Humphrey added. "Creating a file enables the repurposing of captions, such as editing to correct misspellings, to meet broadcast decency standards, or to modify captions to match a new program version."

Softel counts ESPN, HBO, CBS and Turner among its customers. While the burden of captioning has been borne by major networks, Humphrey said that economic pressures are driving affiliate stations to seek more cost-effective ways to handle captioning, especially if they produce local shows or repurpose content for new broadcast outlets. Besides adopting file-based workflows, many PBS stations now produce shows for broadcast by other PBS stations, as well as their own websites and mobile services.

Ed Humphrey, Softel With 15 years experience building captioning products, Toronto-based Evertz Microsystems offers technology to correct and legalize caption errors both in the baseband (3G/HD/SD-SDI) domain, such as the 7825CCE-3G, as well as the file-based domain with the Pharos Mediator Content Management Platform.

"Our baseband products analyze all the caption data going through path and alarm for irregularities and/or violations, then reassemble the data to legalize the output," said Tony Zare, Evertz product manager.

Pharos legalizes and processes captions in the file-based workflow. With either solution, captions become normalized and leave the plant intact and without concern. "The process of converting between the CEA-608 and CEA-708 specifications is where a lot of problems can occur," Zare said. "If a single bit is off in the encoding of that caption stream then the whole system can fall apart until the next refresh cycle of the data sequence."

A Valuable Media Asset
For captioning service providers, such as The National Captioning Institute (NCI) in Chantilly, Va., the economic downturn, changes in technology, and government mandates have conspired to form a perfect storm for closed captioning. While demand for closed captioning has increased, NCI has seen a 25- to 40-percent decrease in pay rates.

Agudelo said the broadcast industry would continue to see a dramatic increase in demand for captioning over the next three years, largely due to the growth of Webcasting. "Broadcasters need to view closed captioning as a valuable media asset because Internet search engines can use caption data to help viewers find and access video from online databases. More access to online video will in turn promote greater need for closed captioning."

â€”Claudia Kienzle This new file-based workflow solution fixes and legalizes captions associated with files in the compressed domain. It performs caption encoding at more than 10 times real-time with no time-consuming re-encoding of video essence or generation loss. The captions are usually ancillary data within the MXF wrapper.

Broadcasters receive programming from many sources including networks, syndication companies, and commercial delivery services, according to Philip T. McLaughlin, chief executive officer at EEG Enterprises, Inc. in Farmingdale, N.Y. "If there's a problem with the captions, it's difficult to push back through the chain to find out where the problem originated or how to get it resolved," he said. "It's far better to have the means to correct it locally and inexpensively."

As one of the original closed caption vendors, EEG has many captioning products for networks, stations, and also post houses. Another new product from EEG called the iCap system addresses a long-standing problem: poor audio connections between broadcast networks and caption service providers. Using audio over IP, the system improves the quality and reliability of audio connections and reduces latency for more accurate captioning.

Finding a better way to generate closed captioning for live programs is among today's biggest challenges, according to Renaud Desportes, Wohler's France-based director of product line management. "Ideally, voice recognition software would create captions automatically," he said. "But this is problematic because it cannot discern important dialogue from other ambient sounds. You still need a re-speakerâ€”to repeat dialogue into voice recognition softwareâ€”or a stenographer to determine what dialogue is important, deal with slang, or make it more concise."