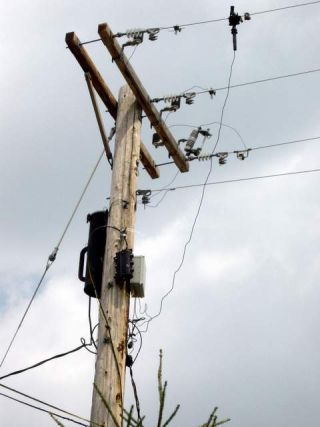 PISCATAWAY, N.J.: I-triple-E has published its standard for Broadband over Power Lines. The Institute of Electrical and Electronics Engineers finalized BPL 1901TM in December and has made them available for purchase. The controversial Internet access technology has been around for several years, but the absence of an IEEE standard has been but one hindrance to its wider adoption.

With BPL, merely plugging a browser-equipped computer into a wall outlet yields high-speed Internet access. 1901-compliant local area networks are said to support data rates of more than 500 Mbps, and first- and last-mile ranges of 1,500 meters. The technology scheme allows for the transmission of data over standard AC power lines of any voltage, at frequencies less than 100 MHz.

The Federal Communications Commission adopted rules for BPL in 2004, setting off a firestorm of objection from ham radio operators. The American Radio Relay League, representing hams, contended that BPL interfered with their operations, as well as short-wave and low-band VHF communications.

The FCC in 2006 reaffirmed its rules, denying ARRL requests to prohibit BPL pending further study. The organization sued, and in April 2008, a federal court ordered the commission to provide BPL emissions studies it had previously redacted. Those documents were released July 17, 2009, along with a Further Notice of Proposed Rulemaking. The ARRL continues to fight it.

The League filed a complaint against BPL provider IBEC Inc., on behalf of members in several communities. The group contends that IBEC’s BPL systems in Lovingston and Fairfield, Va.; Somerset, Pa., and Martinsville, Ind. are creating “ongoing harmful interference,” and violations of current FCC rules.

“ARRL respectfully requests that the commission initiate immediately an enforcement proceeding regarding these PBL systems and cause them to cease operation until such time as they are each in full compliance with the commission’s rules,” the group’s Dec. 29, 2010 filing states.

Part of the FCC’s intention in facilitating BPL was to help small and rural communities deploy high-speed Internet access services. Manassas, Va., while not exactly rural nor small but rather a tony suburb of Washington, D.C., did the first wide-scale launch of BPL in 2005. Ten Mbps service was just $25 a month, but just 600 or so residents and business signed up. City officials pulled the plug last April. In comments filed with the FCC, James Whedbee says BPL’s abandonment in Manassas demonstrates the technology is “obsolete.”

“If BPL is allowed to exist at all the in the aftermath of these proceedings, the commission should adopt the ARRL’s more stringent regulations,” he wrote. “However, even the commission’s watered-down proposal is better than allowing BPL to continue as it does now.

The IEEE’s 1901 documents are available at its standards site; and at its digital library.
-- Deborah D. McAdams