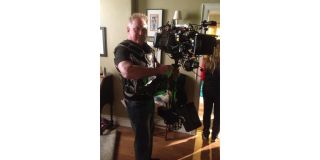 INDIAN WELLS, CALIF. – The evolution is resolution, despite the barriers that remain in 4K distribution and storage. Leon Silverman of Disney laid out a brief litany of production obstacles at the Hollywood Post Alliance Technology Retreat today. Phil Squyres of Sony countered with a deliberation on why it makes sense to produce in 4K now, even if video distribution systems can’t yet handle 4K content.

Silverman is general manager of Digital Studios for Walt Disney Studios, and president of HPA. He’s been around a while. He’s been around since Don Henderson of Kodak used to show up on a movie set with a bottle of champagne when someone shot a million feet of film.

Silverman described how he has a 4K display in the lobby of Disney Studios. At this point, the only 4K content for it is from Sony Pictures. Sony Pictures is heavily into 4K because its sister company is manufacturing the cameras. Production in 4K is a different, and potentially much more expensive, proposition for Disney, where Silverman might have to make the case for spending $10 million to do 4K effects.

In making that justification, how that material would be displayed, quality checked and stored must be addressed.

“What is the master—is it the files that come out of the Red or Arri camera raw? And how does that relate to the archive?” Silverman asked rhetorically. Archiving huge 4K files would require either massive on-site storage or some pretty hefty charges to use the cloud.

A full petabyte would come to $10,490 per month, while a roll of film costs around 7 cents a can per year to store, he said. (Silverman later offered a correction--12.5 cents a month.)

Sony is using LTO for archive, according to Squyres, senior vice president of technical operations for Sony Pictures Television. So far, Sony has shot five productions in 4K. The first was “Made in Jersey,” a one-hour drama for CBS shot by Daryn Okada using the Sony F65. Eight episodes have been completed.

“HD capture on that camera pretty much mirrors what you’d have in raw,” Squyres said. The show was finished in HD-only at Technicolor.

“Save Me,” a half-hour comedy for NBC, was finished in 4K at Colorworks and down-rezed for delivery to the network. Eight of 13 episodes of the show have been shot by Director of Photography Lloyd Ahern using the F65. “Masters of Sex,” a one-hour period drama for Showtime, also is being finished in 4K at Colorworks. DP Michael Weaver is using the Sony F65; two of 10 episodes have been completed.

The final new 4KTV project in the Sony Pictures pipeline is a Michael J. Fox half-hour comedy pilot for NBC, also 4K finished at Colorworks. DP Michael Grady shot it with the F65.

One other series is transitioning to 4K. Seasons No. 3 and 4 of the FX series “Justified” are being shot with the Red Epic in 4K. The show is being delivered in HD, but Squyres said it was a candidate for remastering in 4K, as is being done with AMC’s “Breaking Bad,” which was shot on 33 mm, 3 perf.

Squyres said Sony plans to do three to five more pilots in 4K:

One or two more half-hour comedies are on deck, he said.

“Someone asked, why shoot 4K for TV,” he said. “Of course there’s your library…to future proof.”

“We’ve learned that the 4K raw capture…. give us an incredible amount of exposure latitude, color space, resolutions for reframing and blowups,” he said. “You can treat it more like film, there’s less concerns about exposure latitude. “

One of the reasons Okada selected the camera for “Made in Jersey” was that he wanted to avoid gelling windows or changing lighting for color temperature control, Squyres said.

At Sony Pictures Television, they have a daily lab operated by the TV group for single-camera productions. The lab does color-management support, processes dailies for editorial, archives footage to LTO and does some visual effects pulls. That operation is connected to Colorworks by a 10gigE pipe.

Bill Baggelaar is the senior vice president of technology at Colorworks.

“Production should shoot and finish in 4K… to have an asset they can store that has long-term viability,” he said. “Even if you’re not going to produce in 4K today, you can shoot in 4K and produce in 4K down the road.”

Baggelaar said 4K was a consideration from the outset when Colorworks started finishing TV shows because the 4K workflow was in place for doing theatricals. However, the primary deliverable for TV is HD, he said.

“We didn’t want to jeopardize the HD product by producing in 4K,” he said. “We’re able to look at HD, produce in HD, but we’re looking at 4K in the background.”

This allows them to make an HD render, then flip over and make a 4K render, Baggelaar said. He said the industry needs to look at technologies that accommodate HD, 4K and even 8K, to allow production and post production to be resolution independent, “so that you don’t have to have a backbone or a large-scale storage infrastructure. But you have to have a system capable of dealing with the content.”

On the production side, cost considerations include camera packages and media. Squyres emphasized that 4K camera packages should not cost more than some previous HD packages. As for cost of media, more is needed, though the price per gigabyte is “reduced in comparison to SxS cards,” he said, and can be further moderated by investment. Sony Pictures Television has 150 SxS cards it provides for individual productions, and is making the same investment in cards that go into the F55, he said.

Bandwidth is always an issue. Movement of large files can be minimized by workflow design, Squyres said.

On locally shot shows, Sony sends media directly to the lab with no on-set backup, because four times the data theoretically would take four times the amount of time to back up on set. Squyres said a typical show shot with the F65 uses about four 1 TB cards a day each yielding about 100 minutes, no quite filled up. At the dailies lab, those cards can be downloaded, archived and returned to the set by the next afternoon using lab-sized systems. This eliminates the need for on-set data wrangling, saving time and money.

For out-of-town shoots, Sony has two optional workflows to protect against the catastrophic loss of original 4K files. Previously, there was no cost-effective option to back up film or linear tape, though the only experience they had losing material was with film getting X-rayed.

With remote 4K shoots, they created a parallel backup using HD recorders, which can trigger to record each time the 4K recorders start and stop. They then capture camera output in HD-only, which can be up-rezed to 4K if need be.

The other alternative is using local backup with parallel proxy recording using external device to capture a dnx115 copy during shooting, and sending it to the lab via internet or courier for dailies creation. The 4K cards are sent to a local, near-set operation for downloading and backup overnight. The 4K files can be held on a local RAID until a 4K shuttle drive arrives at the lab. This can then be shipped twice weekly via FedEx.

Dailies are generally done with proxies.

“We learned the processing dailies in 4K files was really anathema,” Squyres said. “It requires expensive hardware, netware and hogs all the resources you have.”

Sony makes proxy copies of the 4K files early in the dailies process. It’s not a proxy for HD mastering—they’re mastering in 4K and down-rezing in HD from that. This is specifically a proxy for making HD editorial dailies.
It’s really a challenge for on-set systems, so it’s done at the lab.

The dailies workflow entails downloading 4K files from SR memory cards, using two Sony D1 readers, into a Resolve workstation attached to a very fast RAID via SAS, maxing out the speed of the D1s for faster-than-real time downloads. The RAID serves as a temporary storage location and keeps 4K files off the WIP SAN.

Immediately after ingest of 4K files in the fast RAID, the cards are sent to archive for copying onto a “post RAID,” a portable, 12 TB RAID for moving camera original files around to other labs, VisFX pulls and as the source of Sony’s 4K LTO archival tapes. After 4K-to-dnx115 proxy is completed, the 4K files are pushed from the fast RAID via 10gigE lines for archive.

Creative editing progresses as usual, using dnx36 files on the Avid. VisFX pulls are done as needed, typically as dpx sequences. Confirms then consist of three platforms:
Avid Media Composer to read and organize the edls and bins sent over by editorial;
Smoke, to confirm from the Avid cuts and insert various fixes and effects in 4K; and
Baselight, to complete the final conform.

The traditional stages of finishing are, as files, the online master, the visual-arts master, the color-time master and the completed titled master. The target is a final 4K IMF. For final archive, there are two separately created sets of archival LTOs: An LTO set of the 4K OCM, and an LTO set of HD proxies from the 4K plus editorial dnx.

“The idea of remastering is that you’re really doing the work twice, and doing it the second time is more difficult,” he said.

In any TV show, there are last-minute discoveries in post—last-minute fixes are then inserted to meet creative intent, to cover goofs and to meet deadlines. Often, these fixes are “seat-of-the-pants cover-ups” that aren’t well documented, Squyres said. There can be several hundred per episode. These have to be ferreted out for remastering.

“Is 4K the new 3D,” he said. “It does seem to be the new benchmark for the future. It certainly seems like it might be more viable than the 3D adventure.”

Sony USA image is Mark LaBonge preparing for a Steadicam shot with the Sony F65 on NBC’s “Save Me.”