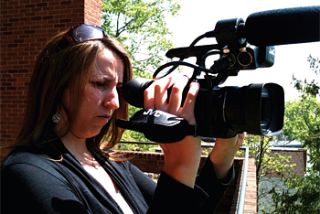 NEW YORK
The first thing Hearst Television wants everyone to know about its Next Generation Newsroom Project is what it is not: a one-man band for news coverage. It also is not aimed at reducing news staff or necessarily saving money.

Created as a pilot project for three of Hearst's 29 stations a year ago and expanded in early 2010, what the next-gen project is designed to do is generate additional news content to help satiate an increasing local news appetite for broadband, broadcast and soon mobile TV.

Hearst’s goal is to have a couple of the JVC GY-HM100 ProHD camcorders at each of the company’s 29 stations by year’s end. Joe Addalia, director of technology projects for Hearst Television, said his group's next-gen initiative is designed to eventually expand local news coverage in its 25 markets where Hearst stations will deploy the group's tool-of-choice: JVC's GY-HM100 ProHD camcorder.

"One of the things we need to do to win our audiences is to play outside our [traditional] newscasts," Addalia said. "The project trains reporters to use light-weight equipment—almost consumer-grade in some cases—to send more content back here to the station. And by the 'station' I'm also referring to our Web sites online, to mobile, to [traditional] TV, and so on."

Addalia said the people responsible for generating added content (usually live streaming) are the same staffers responsible for the stations' traditional news content: its professional fulltime videographers and reporters. In other words, the project is not providing a safe haven for news interns. "Our intent is to 'publish' on a 24/7 basis with more content and to take that content deeper. Our main goal is not to reduce costs, but rather to create more content for winning in local television."

Hearst's tech projects director said a typical scenario might see a reporter arriving at a news site before the rest of his crew and a truck: "So we've given every reporter a laptop with a 3G Aircard, along with a Webcam using StreamBox. We also have an application where we can stream live directly to our Web sites. Our goal is to have a couple of the HD100's [camcorders] at each Hearst station by the end of the year." Local news production at all Hearst stations (regardless of network affiliations) is done in 1080i.

Addalia said he chose the relatively simple GY-HD100 camcorder (with removable sections that can reduce its size to a palm-corder) because "in certain conditions it rivals many higher-end cameras." He notes the camera provides broadcast options that are important in the field—notably XLR inputs for mics. "And it records a file format that can be edited with Adobe Premiere Pro, which is our editing application-of-choice for the entire Hearst Television group. To be able to take the little HD100 and record a file to a SD card that can be seamlessly imported to Adobe Premiere Pro is a big win for us."

Larry Librach, JVC's vice president for broadcast & public sector, said Hearst's choice of his firm's relatively simple GY-HM100 Pro HD is a good fit for what the broadcast group (and other broadcasters) might be seeking these days. "They're desirous of increasing news content for all sorts of venues. They've got the Web, the TV station, [texting], and, of course, mobile TV is coming—so having a professional camera that's not intimidating to reporters and others is important."

LOOKING TO THE FUTURE

The HM100 was introduced in early 2009 at MacWorld. "It has the gain switch on the side, the white balance, and it looks like a pro unit but not too complex," Librach said. "From a news perspective, the camera allows you to edit directly off SDHC [solid-state] media cards. And it gives producers the choice of hanging onto their original footage. And the cost of media cards are pretty close to what videotape used to be. It also has the option of using native Adobe CS5." Another attribute that's both simple and time-saving, he said, is that the format from Apple (.mov) is only one file.

Dave Rosch, news operation manager of WLWT-TV in Cincinnati, said his station was looking for workable ways to gather more local content for both broadcast and online streaming. "The JVC cameras have proved to be a great solution. They're small, user-friendly, and make great video," he said. "And recording to media cards fits right into our file-based workflow. Our sports director went to Reds spring training in Arizona and shot tons of material. Some was FTPed [file transfer protocol] back… some was edited on an Adobe laptop [in Arizona]… and the rest was edited in Avid as soon as he returned to Cincinnati."

In the long-term, TV Industry Analyst James McQuivey of Forrester Research thinks there could be something far more important at stake besides Hearst and other broadcasters simply creating additional content. "It's about learning how to generate that new news content while you still have the 'old business' going on the side, and can prepare for a moment when you may need to switch to a different cost model.

"Everyone knows there's a choke-point coming soon where local TV newsrooms will have to be justified on the basis of a different scale of revenues than they were previously accustomed to," McQuivey warns. "It's not certain exactly when that's coming, but it is definitely coming. Companies like Hearst are wise to experiment while they still can. Then when the moment of truth comes, they'll have a larger set of tools and options to consider—plus they'll have learned what their audiences most value from the new media options that have been presented to them."