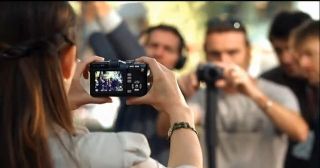 CENTER VALLEY, PENN.: The novelty of using what looks like a still camera to shoot video is over, according to Dave Williams, editor of DV. However, the latest spot from Olympus drives the point home like nothing before. The TV commercial for the Olympus PEN E-PL1 depicts a pitch woman walking down a street, camera in hand, swapping out lenses as bizarre things occur in the background.

A guy rides by on a bike pulling a small slide-in truck camper. Dogs dressed as bumble bees run by. The rather odd occurrences lead up to the revelation that she’s walking through a (mock or actual) studio lot followed by a production team shooting the ad with the PEN E-PL1.

The PEN is the latest but certainly not the last DSLR-type camera to capture HD video. (The PEN is not an actual digital signal lens reflex camera because it does not employ a mirror, so it’s a bit smaller than a DSLR. The user form factor is likewise point-and-shoot, however. ) The $600 camera handles interchangeable lenses, has HD video recording capability, image effects and built-in stabilization.

DSLR-type cameras are valued by videographers for their shallow depth of field and small size. Panasonic even designed the AG-AF400, shown under glass at NAB 2010, based on its Lumix GH1 still camera. Cinematographer Gale Tattersall used a Canon EOS 5D Mark II to shoot an episode of the Fox series “House” because much of the action took place in a crowded space.

“It was the best camera for this particular episode. We don't plan to shoot another entire episode this way, although it could be an incredible tool for car shooting or squeezing into tiny spaces or maybe some visual effects shots or teasers,” Tattersall said in an interview with Videography.
-- Deborah D. McAdams