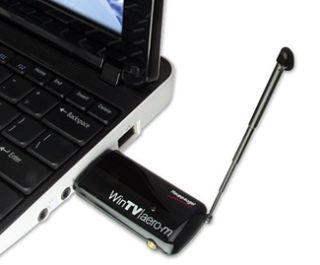 Support for the Hauppauge Aero-M USB receiver under Linux has improved with the release of the 3.2 kernel earlier this month. After some initial testing I'm happy to report its performance operating under Linux is as good as it is in a Windows environment. The Linux drivers also come with a unique feature that isn't easily available in Windows.

I tested the Aero-M using Arch Linux with the latest kernel, 3.2.2-1 and the Kaffeine media player, which I find superior to WinTV under Windows in that it supports the ATSC program guide and scheduling recordings using the program guide.

The Maxlinear MXF-111 rejected 4G hot spot interference better than the Hauppauge models HVR-950Q and HVR-850 and also the PCTV Model 801e (originally by Pinnacle, now Hauppauge). While some minor interference was visible at times with the Aero-M, it was far less than that observed with the other tuners.

Details of the "State of WinTV Aero-M Support under Linux" were recently posted by Michael Krufky on the KernelLabs.com blog. People who travel between the United States and Europe will be pleased to know that under Linux, they can use the same Aero-M tuner for both ATSC and DVB-T. That feature, as far as I know, is not available in the standard Windows WinTV7 software.

The Aero-M includes an LG2161 ATSC-MH demodulator in addition to the LGDT3305 ATSC demodulator. ATSC-MH is not yet fully supported under Linux, but according to Krufky's posting, it's something he and his associates at KernelLabs.com are working on. In the posting, Krufky explains, "Since ATSC-MH is a relatively new delivery system, some API changes will need to get cleaned up and merged before support for the LG2161 can be added to the kernel. Additionally, since the payload format is different from standard transport streams, some changes will have to be made to the kernel demux and /or some user space libraries in order to make ATSC-MH work with user space applications."

There is open source driver support for ATSC-MH and the LG2161 in Krufky's development repositories, but there are no open-source user space applications to support it. If you are interested in ATSC-MH under Linux, please contact Michel at KernelLabs. Even if ATSC-MH support is not a priority, he would like some feedback from people who are using the Linux Aero-M drivers.

I'm very happy with it and greatly appreciate KernelLabs work to make it available under Linux. I haven't had a chance to test Aero-M performance in other markets to determine its performance on weak distant signals, but based on what I've seen in Los Angeles I expect it to be excellent.