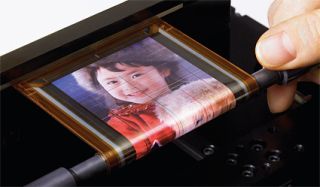 DOYLESTOWN, PA: Of all the new gadgets shown at the 2012 International CES, none drew more attention than a pair of super-flat, 55-inch TVs in the Samsung and LG booths. The areas around these exhibits were consistently jammed with attendees, all pushing and shoving to look at the next wave in display technology—super-thin, bright, and colorful TVs that are based on organic light-emitting diode (OLED) technology.

At a CES where tablets seemed to dominate, the rollout of Samsung's. Photo by Pete Putman Prior to this year, the largest OLEDs shown publicly were in the 40-inch range, and that was almost 10 years ago by Epson and Samsung. So the CES unveiling was a real-show stopper, as was the announcement that LG plans to begin mass OLED TV production by mid-year for eventual retail sale. No prices have been announced yet for these super-thin beauties, but you can be sure they won't come cheaply.

So, what's the big deal with OLEDs? Will they replace LCDs? Plasma? If so, when? Read on…

Way back in the 1970s, Ching W. Tang and Steve Van Slyke, a couple of scientists working at Kodak Research Laboratories, were trying to develop a new type of photocell. They applied a low DC voltage to an organic film layer in the middle of a semiconductor junction, and watched as the organic material glowed brightly.

Continued research by both men led to research papers that were published in 1987 and 1989, describing the composition and behavior of "organic electroluminescent diodes." And thus was the OLED industry born!

Several characteristics of OLEDs are very attractive to display manufacturers. They can be manufactured on extremely thin substrates via vacuum thermal evaporation, or by precision application of polymer-based OLED compounds, a process developed at Cambridge University that literally uses ink-jet printing.

Throughout the 1990s, several companies jumped on the OLED research bandwagon, licensing patents from Kodak and the Cambridge technology spin-off CDT. At one point in the early 2000s, over 25 different American, Asian, and European companies were building and showing OLED prototype screens in small phones, portable TVs, and even an OLED wristwatch.

LG Electronics' 55-inch consumer OLED displays was the talk of the television crowd. Photo by Pete Putman But the technology seemed stalled, and for good reason: OLEDs were extremely difficult to manufacture. They did not tolerate moisture at all, and early OLED backplanes required four times as many thin-film transistors to drive the devices. Larger OLED display screens had poor white field uniformity, and to make matters worse, individual OLED colors aged at vastly different rates—some lasting only a few thousand hours.

Everything started to change a few years ago. Sony, a leader in OLED R&D, brought to market the 11-inch XEL-1 OLED TV, using the small molecule (Kodak) process. It was expensive ($2,500) and aged very rapidly, but whetted the public's taste for these colorful, super-thin displays.

In 2009, Samsung announced it would start shipping Galaxy smart phones and (eventually) a tablet computer that used SM OLEDs exclusively. Later that year, LG Display acquired the entire SM OLED patent portfolio from Kodak and announced it would build a Generation 8 OLED fabrication plant in Korea to start selling OLED TVs. (LG's 15-inch OLED display panels were available as TV products in Korea in 2009, and were also used in the TV Logic 15-inch OLED broadcast monitor first seen at NAB in 2010.)

In 2010, DuPont announced major breakthroughs in extending OLED life spans, claiming over 100,000 hours for green, 44,000 hours for red, and 38,000 hours for dark blue—and those numbers were at brightness levels of 1,000 candelas per square meter, or 293 foot-Lamberts. And in February 2010, Sony brought out its first OLED-based reference-grade video monitors in 17-inch and 25-inch sizes, using a proprietary top-emission SM OLED design.

Two years ago, Sony demo-ed a prototype rollable OLED display at a Society for Information Display conference.WHERE WE STAND

The most logical place to use OLEDs right now is in small displays that are only used for a year or two, such as smart phones. (That also happens to be the largest market in the world for displays.) So it was quite a leap to see 55-inch TV prototypes come to market, especially considering that as recently as two years ago, the usable 15-inch panels (yields) from LG's earlier OLED manufacturing were less than 13 percent.

OLEDs can be used anywhere that LCD and plasma displays can be used. OLED pixels can be manufactured with extremely fine pitch values, so a 1920x1080 OLED monitor shouldn't be any larger than a comparable LCD monitor. OLED screens can be very flexible, which helps protect them against breakage. And OLED displays hold up much better in direct sunlight than LCD displays.

Although some observers at CES speculated that both TVs used the same type of OLED, nothing could be further from the truth. The LG prototype uses white OLEDs with an overlaid stripe of red, green, blue, and white filters, while Samsung's prototype employs discrete red, green, and blue OLED emitters. The former process resembles how LCDs work, while the latter has more in common with plasma.

Until the yield issues are worked out and costs are lowered, OLEDs will remain a 'boutique' for a few more years. Long term, they should eventually replace both LCD and plasma, as LCDs still have viewing angle and black level limitations, while plasma requires much higher operating voltages.

When that day comes, you'll probably find versatile OLED displays in everything from phones to TVs, GPS units, medical equipment, and even on your wrist. (Yes, a prototype OLED wrist TV has already been shown! Dick Tracey would be proud…)