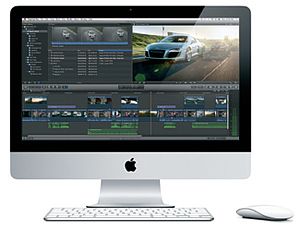 CUPERTINO, CALIF. — Apple has kicked up what may be a game-changing firestorm with the release of the long-awaited next incarnation of its editing software called Final Cut Pro X. At the NAB Show—even though they were not an official exhibitor—Apple managed to steal headlines by announcing Final Cut Pro X (properly pronounced "10" rather than "ecks") during the Las Vegas user group's 10th annual SuperMeet gathering.

Final Cut Pro X was released on June 21 as a download from the Mac App store for just $299, accompanied by new versions of Motion 5 and Compressor 4 sold separately for $49.99 each. Compare that to their Final Cut Studio suite, first released in 2005 which by its final upgrade in 2009, had bundled Final Cut Pro 7 together with Motion 4, DVD Studio 5, and Soundtrack Pro 3, as well as the Color 1.5 and Compressor 3.5 applications for $1,000. It's still available from online resellers for as little as $765, which may be welcomed by potential users since with the release of Final Cut Pro X, Apple has discontinued Final Cut Studio 3 and will no longer be developing or supporting it.

Misha Tenenbaum But as soon as Apple editors got their hands on Final Cut Pro X, almost immediately gasps of disappointment filled both print and cyber media. Even the editors of Conan O'Brien's late night talk show have posted a parody of Final Cut Pro X on YouTube. More significantly, the first 1,300 customers on the Mac App store gave it only a low 2 1/2 star rating, which may be the reason that on June 28, postings on Final Cut user forums began reporting that Apple had started offering refunds to early adopters. Apple did not return calls.

Some of this reaction from the editing community may be due to the fact that Final Cut Pro X is not just an update of Final Cut Pro 7, but a totally recoded software package that is now a 64-bit application written in Apple's object-oriented Cocoa language. As a result, it is blazingly fast and can access over 4 GB of RAM. Also on the positive side are the new magnetic timeline, new media organizing tools, and "Smart Motion Templates" for streamlined effects and graphics creation. Perhaps best of all, Final Cut Pro X boasts lightning-quick background rendering of even long-GOP H.264 files into Apple's ProRes format.

Andy Neil But after that, the head scratching starts for editors who want to consider Final Cut Pro X a professional successor to FCP 7. One of the first things you notice is it cannot import projects that had been started in Final Cut Pro 7. Final Cut Pro X also cannot ingest source material from tape or export the finished product back to tape for delivery. Unlike FCP 7 it lacks multicam editing capabilities, sophisticated DVD authoring tools and cannot exchange projects with other systems via EDL or XML files. Even OMF export requires the Pro Export FCP 5.0 plug-in from Automatic Duck for a tasty $495.

Scott Simmons Final Cut Pro X's completely redesigned GUI is a major concern for Misha Tenenbaum, a film and video editor who also teaches Final Cut Pro at Video Symphony in Burbank, Calif. "Even for me as an instructor it requires an enormous learning curve," Tenenbaum said. "I'd go so far to say that Final Cut Pro X is more difficult to learn than going from FCP 7 to Avid, or FCP 7 to Premiere Pro."

Gary Adcock, a Chicago-based film and TV production and post production workflow consultant and founder of the Chicago Final Cut User Group, thinks the new Final Cut Pro X is "an amazing application" because of its ability to handle advanced metadata.

However, for professional broadcast and feature film work, its inability to talk to other systems is a major drawback.

"Final Cut Pro X cannot handle any of the native R3D files from Red Digital Cinema cameras," Adcock said. "I'll be using Final Cut Pro X only for non-broadcast projects while I wait to see how Apple is going to make further developments."

The Hollywood 2D and 3D post production facility, Oasis Imagery, where 65 percent of their work has been done on FCP 7, will not be switching to Final Cut Pro X at this time. "We don't consider it a pro app," said Brandon Heaslip, director of engineering, "and will be waiting until the ancillary gear we have invested in from AJA Video or Blackmagic Design works with it as well as it does with FCP 7."

In Nashville, TV editor Scott Simmons has been using FCP 7 at Filmworkers post production house and conducted one of the first hands on tours of Final Cut Pro X on June 30 for filmmakingwebinars.com.

"One of the most baffling things to me is the fact you cannot hook up a professional broadcast monitor to Final Cut Pro X," Simmons told me before the webinar. "I also like to have a separate viewer for the source material and the record canvas. With Final Cut Pro X there is only a single display that switches back and forth."

But freelance editor Andy Neil, who cuts both pilots and episodics using FCP 7 for broadcast and cable has hopes for Apple responding to all the feedback it's getting regarding Final Cut Pro X. "The question is how long it will take and how many people will jump ship before they do," he ventured. "I think if Apple responds to the angry reactions within the next 6 months, they won't have too large a migration to other competing NLE's."

Despite all the hubbub swirling around Final Cut Pro X, everyone needs to wait for the impending release of the next Apple OS, Lion, and developments such as Thunderbolt-enabled peripherals before making a final judgment. After all, this is Apple, and Apple usually knows what it is doing. Now the question is, do they also know how to listen?