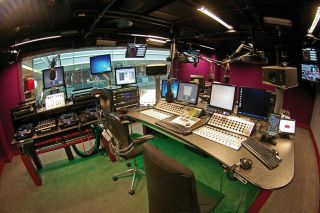 LONDON — Harman said today that it’s been a bit more than three years since it announced a major contract with the BBC for 85 Studer OnAir 3000 digital audio mixing consoles. The mixers were to be deployed at the BBC’s MediaCityUK, in the north of England, and in the second phase of the rebuilding of the London headquarters, the new W1 Centre.

W1 is now home for all the BBC’s national radio networks, as well as a focus for the broadcast’s national and international news operations. The transformation of the London HQ included the creation of 140 acoustic spaces for Radio & Music, News and World Service in the new 10-story-high West One Phase 2. Three years in, all facilities have been equipped, Harman said. Nearly 30 OnAir 3000s were installed at the new MediaCityUK broadcast centre in Manchester, for the BBC’s domestic radio services. The new West One Phase 2 facility is home to more than 5,000 personnel, 450 of them in the newsroom on the ground floor gallery.

In London, the OnAir 3000s were deployed in GP and self-op studios. The audio integration of a total of 80 studios at West One Phase 2 and BBC North was carried out by IPE, who bid successfully for the contract under an EU competitive tender process.

With the BBC’s specialist project manager, Andy Laughton, providing the liaison between Studer and IPE, factory testing was carried out on site, along with acceptance testing and operational proving, in time for the MediaCityUK studios to go live in September 2011, while down in London World Service went live in January 2012. All Studer consoles were configured on site and issues concerning workflow resolved during the BBC’s operational proving phase.