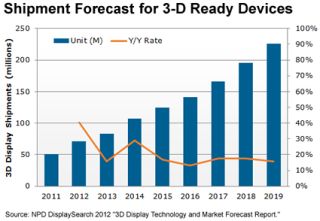 More than half of all households worldwide will have 3-D-ready televisions by 2019, although the actual level of 3-D viewing will most likely lag, according to a new report from NPD DisplaySearch.

“Despite some industry sentiment that the 3-D bubble has burst, we expect 3-D to continue to grow across several categories including TVs, portable devices and public displays,” noted Jennifer Colegrove, VP of emerging display technologies, NPD DisplaySearch.

The 3-D television picture isn’t entirely rosy, however. Challenges, such as a limited amount of 3-D content and a complicated set up process, need to be overcome before broader adoption materializes. “Our research shows that even though consumers own these 3-D ready TV devices, they haven’t viewed a significant amount of content on them,” Colegrove said.

Autostereoscopic displays — those not requiring glasses — aren’t likely to have a significant affect on the uptake of 3-D TVs by consumers because of limitations and the high price of the technology when it comes to large displays. However, an autostereoscopic 3-D tablet may be on the market as early as next year, NPD DisplaySearch said.