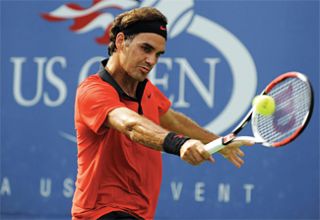 ©United States Tennis Association
FLUSHING MEADOWS, N.Y.
There are sports in which technology can make all the difference. Perhaps that's nowhere more obvious than in the broadcast coverage of tennis, where technology can capture the slap of an errant ball over the foul line or the almost-imperceptible tick of a serve across a net.

This theory was dramatically put to the test during the 2009 US Open tennis tournament when reigning women's singles champion Serena Williams was penalized with a controversial foot fault on a final match point.

The shot of that misplaced foot was seen over and over again thanks to slo-mo replay technology used by CBS Sports in its 2009 coverage. And during the last several years, tennis has continued to make headlines with its use of high-speed cameras and slow-motion replay technology, with innovations like the MacCam and HawkEye intensifying coverage and helping to solidify previously inconclusive calls.

At this year's US Open tennis tournament, which is set for Aug. 30 through Sept. 12 at the Billie Jean King National Tennis Center in Flushing Meadows, N.Y., CBS will again serve as host broadcaster, working alongside cable network ESPN, and providing a world feed to the Tennis Channel, USA Network and international broadcasters such as BSkyB.

This year, CBS is on the cusp of testing broadcasting's next tech evolution. At press time, the network was placing its bets on 3D and the promise inherent in that new technology. However, as with most broadcast innovations, 3D isn't particularly easy to do correctly.

"3D is always complicated and very expensive," said Ken Aagaard, executive vice president of operations, engineering and production services for CBS Sports. But he noted that such complications make the job more thrilling.

"I love the more complicated and harder it is."

Despite the difficulties, 3D has strong attractions. As long as the exponential costs associated with it can be managed, Aagaard said that CBS wants to do it.

In the last six months, there's been a litany of sports-focused programs that have tread in 3D water: golf with the Masters, basketball with the Final Four, baseball with the All-Star Game and Home Run Derby. Aagaard believes that a definitive business model exists somewhere down the line, whether it's pay-per-view or a dedicated channel on the order of ESPN's 3D sports TV channel.

While experts across the industry continue to mull over the long-term viability of 3D—there has been more than one industry insider who has expressed doubt that consumers would buy into 3D the way they've embraced HD—"watching golf, basketball and soccer in 3D is a cool and unique situation," Aagaard said. "Movies in 3D have begun to pave the way. Because of that success, sports is falling in behind."

In addition to considering 3D for its US Open coverage, CBS Sports is also relying on technologies such as high-speed cameras and integrated graphics packages to bring well-rounded coverage to this year's tournament.

"We get better at [our coverage] every year, both the cameras themselves and the style with which we cover the event," Aagaard said.

The network is using cameras and gear from Tech Imaging Services, whose SwingVision technology will be used to slow down the speed of a 110-mph ball as it whaps against the floor of the court. The network will also be relying on file and server technology from EVS.

A key graphic component of this year's tournament will be the MVP Motion Video Play graphic technology from Orad Hi-Tec Systems, also known as Flomotion.

"It allows us to create a unique graphics look and give the game a little pizzazz," helping CBS analysts better explain the game, Aagaard said.

Flomotion is a video and graphics enhancement system that can track multiple objects—such as a player or the ball—and showcase multiple images of the player and ball as they appeared during several moments.

"It allows us to show where players were during all different points," Aagaard said.

Tennis Pro Maria Sharapova ©United States Tennis Association Graphics and cameras won't be the only workhorses at the US Open this year. CBS will also be using a new 56-foot mobile unit from F&F Productions. The van is known as the GTX-16, and will provide center court coverage with a Grass Valley Kayenne HD production switcher, EVS HD XT[2] Spot Box, Evertz router, several Ikegami HDK-79EC HD multiformat cameras fitted with Fujinon lenses, a mix of Sony, EVS and Panasonic VTRs and playback devices, along with audio gear from Calrec, Dolby and Evertz, among others. A highlight of the vehicle is its virtual monitor wall, which includes 15 HD LCD monitors and an Evertz VIP-X routing and display system.

CBS Sports will also tap NEP's NCP6, a mobile standard-definition unit that will be used to upconvert programming to HD. NEP's ESU engineering transmission support truck will be part of the lineup too.

While it should come as no surprise that nearly 95 percent of the programming NEP shoots is in HD, the firm is also seeing a growing number of its clients move into 3D production.

"We are seeing things move into the 3D world, and from a routing perspective, moving HD, SD and 3D is handled in the same way," said John Tomlinson, project manager with NEP who will be overseeing the firm's US Open coverage.

Tomlinson cautioned, however, that there could be some pitfalls ahead.

"Where [3D] gets tricky is when you get into monitoring and distribution to the right people," he said.

CBS Sports expects viewership of the US Open to be high again this year. Last year, total audience for CBS' televised broadcasts was 55.8 million, a 24 percent increase from 2008.