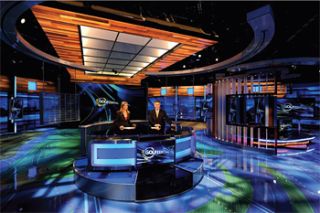 Senior Engineering Manager Robert Majors said the network needed a production playback server for HD effects transitions. “When Abekas came in with the Mira--cost-wise, channel-wise and just the functionality of the machine--it gave us the flexibility we wanted.” He adds that the Mira servers can also be controlled by VDCP with Golf Channel’s new Sony HD switchers.

“Functionality was the key here,” says Golf Channel’s Senior Director of Engineering, Ken Botelho, “and the efficiency. We can actually do file transfers from anything our creative services or graphics department puts in a new loop. We just do file transfer over for ingest.” Majors adds “you’ll see a full 1080i transition or effect on air.”

“The ability of having four channels in the box and being able to change that at any time to either be four full video (channels), or one video, one key, two full video, or two video and two key channels,” is important to the applications at the channel, according to Majors.

Mira provides playback of animated switcher transitions with video, key and audio. It can also be employed for loop play to feed on-set screens. Vertically mounted screens can be fed using the servers’ optional “Flipper” feature, which can operate on a channel-by-channel basis.

The Mira servers can also be used for live sports instant replay, handling up to six live HD cameras, with two channels of slow motion instant replay supported, complete with dissolves and wipes between the two output channels.

Mira servers are currently employed world-wide at television stations, networks, production facilities, schools and sports venues, but Golf Channel is currently the largest user. The channel began with the acquisition of eight 4-channel servers, but upgraded one of these servers to an 8-channel box. “Right now, we have four 4-channel (servers) that we use for transitions,” explains Botelho . The other four servers (three 4-channel and one 8-channel) are used to feed animated graphics loops into on-set monitors in the studios.

“Golf Channel was very thorough in their evaluation and put the Mira server through its paces,” said Junaid Sheikh, president of Abekas. “We had to meet certain cost, scalability and functionality metrics. We were very pleased when Robert and Ken chose the Mira. Golf Channel is a perfect showcase for the Mira because you can see them on the air 24 hours a day.”