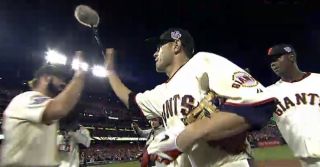 NEW YORK: The San Francisco Giants took game one of the World Series last night while Cablevision customers sat out day 12 of a Fox black-out. Three among their numbers were sufficiently incensed to march down to the law office of Todd J. Krouner and file a $450,000 class action lawsuit against the cable operator.

Julia Gallo, Andrew Koplik and Dorothy Rabsey are seeking restitution for Cablevision’s 3 million subscribers, “who have been deprived of the Fox Channels, which have been replaced by Cablevision’s annoying and self-serving loop,” the suit reads. “In the meantime... Cablevision has refused to provide any rebate to its customers, who pay an average of approximately $150 a month to Cablevision.”

Since those customers are paying for Fox channels they’re not getting, they should be refunded the cost of one month’s worth of service, the suit reasons.

The complaint also asks for damages under state consumer fraud statutes and seeks to prohibit Cablevision from reaching the point in retransmission disputes where channels are pulled. The suit was filed today in U.S. District Court for the Southern District of New York.

Cablevision’s footprint covers parts of New York, New Jersey and Connecticut, where people are split in terms of blame. Rich Greenfied at BTIG Research is taking a poll.

Of 285 respondents, 28 percent blamed Cablevision and 25 percent blamed Fox. Roughly half blamed both. A majority said they’d miss baseball the most. Football was a close second. Subscribers already missed a National Football League game between the New York Giants and the Detroit Lions. Fox is covering a New York Jets game against Green Bay Packers on Sunday, prompting Jets owner Woody Johnson to step into the fray.

“I spoke with Cablevision and News Corp. about the importance of broadcasting our game this Sunday,” Johnson said in a statement posted on the Jets’ Web site. “Both companies acknowledged the passion of our fans and their desire to watch the game. If a resolution cannot be reached, I hope that they can set aside their differences to air our game against the Packers.”

In the event they don’t, more subscribers might be moved to dump Cablevision. The Federal Communications Commission already issued a “Consumer Advisory” recommending other forms of reception, including an antenna. According to BTIG’s survey, around 7 percent have disconnected. Greenfield allowed this could be high.

Given Cablevision’s “high triple-play penetration and the hassle of switching, we suspect 1 percent or less of subscribers have churned to-date, but fear that number could grow meaningfully if the dispute continues,” he said.

BTIG’s survey said 19 percent of current Cablevision subs will leave if the dispute is not settled in the next week; the figure rose to 37 percent if it went on for another month. Around 21 percent have called to complain, and more than half of them waited at least 15 minutes to talk to a customer service rep; 15 percent waited at least 30 minutes. Several hung up while waiting.

Of those who called to complain, 16 percent asked for a discount or a rebate. Most received none unless they threatened to cancel service. Those folks were offered $10 a month off for a year, or $20 off for two years.

Greenfield said Cablevision also directed subscribers to MLB.com, where the World Series games are streamed in their entirety for a fee. Cablevision was said to offer a refund for the service.

Game two between the Giants and the Rangers starts tonight at 7:30 Eastern.
-- Deborah D. McAdams