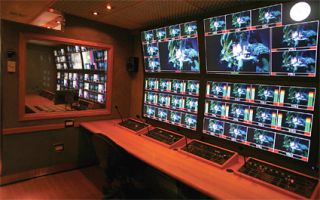 HAMILTON, N.J. — With the ability to display multiple sources on a single videowall or flatscreen, multiviewers reduce the space and power consumed by monitors as well as the heat they throw off—making them essential for master control, broadcast trucks, and other space-challenged environments.

Further operational benefits—such as automatic UMD (Under Monitor Display) labeling of router outputs, tally status, and alarms for signal failure—arise from solutions that provide tighter, smarter integration between the router and multiviewer.

Snell MV multiviewer
Since feeding signals to multiviewers can tax router outputs, the design behind Snell's router/multiviewer integration involves installing optional, modular cards that add multiviewer outputs to the Sirius 800 series router range. Since these outputs need only to support shorter, lighter cables and smaller coax connectors used for multiviewers, Smith said it's more cost-effective than buying a larger router, and only increases the overall router height by 1RU.

The MV Series multiviewer uses standard coax cable rather than proprietary connectors; and the Snell Centra control and monitoring system can be paired with a Snell or third party multiviewer for greater flexibility.

The key trend impacting hybrid router/multiviewer solutions is the dramatic increase in the number and format of compressed and uncompressed signals to be routed and displayed, according to Kerry Wheeles, director of product marketing for Harris Broadcast Communications. "Considering that facilities are increasingly sending and receiving video over IP networks, Harris HView multiviewers uniquely support both baseband, such as HD/SD, and broadband, such as IP transport streams, within the same 3G-SDI unit," he said.

While many hybrid router/multiviewers on the market devise proprietary connectors to bridge the router and multiviewers, the Harris HView SX Hybrid multiviewer integrates within output slots of any Harris Platinum router. "This allows the multiviewer to benefit from the router's cross-point redundancy, with no single point of failure," Wheeles said. "This simplifies external wiring, integration, signal testing, and control, and saves money by eliminating outboard devices."

Harris HView multiviewers support another key trend: hybrid 3G-SDI and stereo 3D environments, such as that found in newer trucks. Users can configure the multiviewer to display left eye/right eye signals separately or combine them, for a choice of whether to watch with or without stereo 3D glasses. And they can use dropdown menus to easily select the type of sources and/or outputs desired.

Evertz VIP-X "This means more than simply reducing the cost of the hardware, but also reducing overall rack space usage, wiring, and power. On trucks, it also means respecting limits on weight and space, which equates to overall fuel economy of the vehicles," Horner said. "Evertz' focus is to simplify the setup and control of the router/multiviewer combo, with an ergonomically efficient control system that holds the line on integration, setup, and training costs."

Evertz designed its VIP-X combined routing and multi-image display system to feed signals to the multiviewer without tying up additional router destinations. Rather than integrate the multiviewer within the router, VIP-X uses a single X-Link port, modular card, and cable to deliver router signals destined for the multiviewer.

"When we designed our product, we determined that operators would likely only look at 16, maybe 32, pictures on one display," said Scott Bosen, director of marketing for Utah Scientific, in Salt Lake City. "Beyond 32 windows, the cost and complexity increase dramatically."

"We also see a trend where customers are using consumer HD flatscreens rather than expensive broadcast monitors because the picture quality is sufficient for their purposes and they're a fraction of the cost," Bosen said. "On trucks, TDs look at camera feeds, graphics, and other sources to choose the best content for their show. But evaluating signal integrity is usually done with separate test and measurement tools."

Utah Scientific's multiviewers offer built-in extenders for the outputs and give the user the choice of HDMI or DVI output formats for more flexibility in the selection and placement of displays. The UTAH-400MV can use 12 HD-BNC connectors or a special MV Link connection that condenses 12 coax cables into one multi-core cable to simplify installation and reduce costs. "Customers need to have a realistic plan of what they want to display to get a handle on costs," Bosen said.

When Miranda Nvision 8500 Hybrid 3-Gbps HD/SD routers are paired with Miranda Kaleido multiviewers, it's possible to create large-scale videowalls of up to 288 independent multiviewer displays.

For instance, two Nvision 8500 Hybrid routers integrated with 72 Kaleido-X16 processors yields up to 144 displays; and 12 Kaleido-X processors can create up to 96 displays. Any brand multiviewer can be partnered with Nvision routers, but Kaleido offers the highest level of integration.

Caron added, "When integrating routers with multiviewers, choose a solution that doesn't jeopardize your core router functionality and make sure you have effective recovery scenarios in place for mission-critical operations."