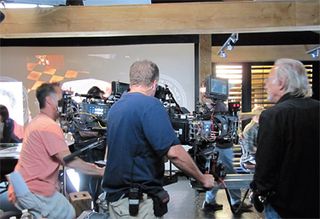 HOLLYWOOD
"NCIS:Los Angeles" is breaking new ground in television production and post production, thanks to the file-based world it has created behind the scenes at its Paramount Studio editing rooms.

The police procedural television series was spun off in 2009 from "NCIS" (Naval Criminal Investigative Service), itself a spin-off from another CBS series, "JAG" (a military acronym for Judge Advocate General). It's produced by Shane Brennan Productions, in association with CBS Television Studios.

But unlike the storyline, the making of "NCIS:Los Angeles" was not derived from these shows, but from collaboration on another show from CBS Television Studios, "Everybody Hates Chris." In-house production, post personnel and Hollywood-based network designer and post house DigitalFilm Tree joined forces on both to use Apple's Final Cut Pro as a common thread for dailies, playback, editing and finishing.

"NCIS:Los Angeles" is the next leap forward in this data-centric experience.

"What they're doing doesn't happen on traditional TV shows," said Ramy Katrib, DigitalFilm Tree's founder and CEO. "Most shows will use one primary camera—or two that are both the same."

"NCIS:Los Angeles" uses multiple digital imaging systems, depending on the episode. The equipment roster includes brand new Arri ALEXA cameras, which can record to HDCAM SR tape or to SxS memory cards formatted for Apple QuickTime—Apple ProRes4444 or Apple ProRes 422(HQ). In addition, there are Canon DSLRs (1D, 5D, 7D, T2i), the JVC GY-HM-700, four JVC GY-HM-100Us, and GoPro's HD HERO Naked: a performance wearable 1080p HD video and still photo camera. The show uses the GoPro camera for action shots where it may be dangerous to have a person or a really expensive camera in harm's way, said Whitmyre—for example, on a car bumper, door that gets crashed in, or on a motorcycle.

DigitalFilm Tree tested the image quality of the Arri ALEXA this year, and coordinated with Whitmyre and DP Victor Hammer to design a workflow for processing all the footage to create dailies for each morning editorial session, plus back up file-based "negatives" on the DFT server.

In its capacity as a post-production facility, DigitalFilm Tree processes all of the show's main camera footage—everything but the "surveillance video" used on the set's playback monitors— and provides finishing for the overall episodes.

Recordings captured by the various devices are delivered via hard drives, tapes, and flash cards to DigitalFilm Tree by one of the show's production staff. DFT then processes them into uniform dailies using Apple's ProResLT codec for editing on Final Cut Pro. The daily files are saved to a FireWire drive, which is picked up at 6:30 a.m. by an "NCIS:Los Angeles" staffer and taken to the show's editorial facilities on the Paramount Studio lot, where they're copied to an Xsan editorial server for the editors and assistant editors to cut the show.

In contrast, the playback video is processed entirely on the Paramount lot by the show's "surveillance playback" production unit [see "In-house post House"].

"They expressed a desire to process some of their own footage [instead of sending it to a post house]," said Katrib. "They needed it faster because it's used on the sound stage—so we designed a network."

"They have nine systems [workstations] on the SAN for end-to-end processing that we designed and installed," he said. "All of those systems are connected to a shared area network so that they [the editing staff] can be collaborative and share files."

Cluster configuration tools enable users to optimize processing using a "sum is greater than its parts" approach. The 8-core computer breaks up the job and parcels out tasks like a render farm. The components are processed simultaneously, after which a dedicated computer puts all of them together.

"When they need to render something, they have the ability to utilize their nine systems at the ready like a post house," said Katrib.

At press time, DFT was working with Whitmyre on new software to facilitate collaboration via iPads. Its working title is "Project X." A prototype implementation is targeted for this season.

Whitmyre is also looking at hardware.

"Apple 12 core computers and improved storage would allow us to use higher resolution media—approaching uncompressed or whatever flavor we choose," he said. "That would create an even more direct pathway from shoot to edit to finishing."