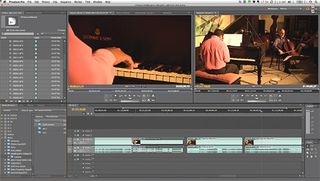 GUILFORD, VT.—For a long time, nonlinear editing and post production workflow was fairly straightforward. One would capture, edit, and output all the same format, based on the tape stock the camera used and the (usually) proprietary format used by the NLE system. As formats advanced and diversified, we shifted from tape to digital files for acquisition and delivery, moved from standard definition to high definition and a plethora of delivery formats, began shooting in formats not meant for editing or delivery, and in general experienced a remaking of the edit-post scene into a digital equivalent of the wild west. For these and many more reasons, transcoding has become a necessary part of the workflow.

Transcoding, for our purposes here, is the process of taking a media file in one format and changing it into something your editing system can work with more expeditiously. To steal a bit from the doctor's creed, the guiding principle in transcoding decisions is to do no harm (to the file/image quality). The bad news is that most codecs are lossy, meaning that information is discarded every time a file is compressed, re-compressed, or transcoded, like generation loss associated with tape to tape copies; the good news is that the newer codecs are far more efficient with far greater fidelity and accuracy (the stuff that gets thrown away in the name of efficiency winds up having minimal effects on visual quality).

WHAT POINT IN THE CHAIN?

The main scenario for transcoding comes up at ingest, at the top of the post workflow. An increasing number of camera manufacturers are deploying codecs specialized and optimized for capture. These formats provide high (or extremely high) quality capture, but not necessarily efficient editing and rarely delivery. Camera makers generally provide software for logging, selection, and transcoding. As an example, Sony's XDCAM EX cameras, which shoot in a Long GOP MPEG-4 format, come with XDCAM Clip Browser and XDCAM Transfer, which provide logging and transcoding functions, as the camera's acquisition format is not suitable for editing in most systems or any forms of delivery. RED cameras and the recent explosion of use of DSLRs for shooting HD video are other common examples of optimized acquisition formats that have to be transcoded before editing. The key question becomes: at what point in the workflow should the transcoding happen? A careful look at the whole workflow is essential for making the correct choices for efficiency and highest quality.

Telestream’s Episode is a good example is one of several third party cross platform software transcoders The first choice is to determine edit and delivery formats; these are usually decided by the parameters and nature of the project and the NLE system in use. The theory is that if you know where you're going and how you're getting there, it is easier to choose a starting point and route. Following our XDCAM EX example, the project will be edited in ProResHQ and delivery will be in more formats than you can shake a stick at, including DVD (MPEG-2), web (H.264 at various frame sizes), and HD projection (MPEG-4). Since there is no way around transcoding in our example, it remains to decide about when to transcode and how.

One solution is to use the manufacturer-supplied software and/or the import method featured by the NLE in use, and import all or a selected part of the footage. As long as you save the camera files as originally shot (and transferred from whatever recording media the camera uses), you can import selects with this method to save storage space. One key consideration at this stage, and one which will be touched on later, is whether or not the footage has metadata embedded, and whether or not that metadata is useful (or even used) in the NLE in use. Another key consideration is to understand how the NLE in use deals with these files on import. Some NLEs need to make Preview files to insure smooth playback; others render to an intermediate format before importing to the format in use, thus effectively doubling the storage space needed.

A strong case can be made to use a third party solution for the transcoding process. This method allows for shot selection and control over the rendering and storage processes and the space and time required by each. Cross platform software solutions include Magic Bullet Grinder (primarily for DSLR footage (MSRP $49), Telestream Episode (MSRP $495-$995), Sorensen Squeeze (MSRP $799), and Divergent Media's ClipWrap2 (AVCHD and HDV footage, (MSRP $49.99).

Adobe Premiere Pro CS Another option for the top end of the workflow is bring all clips into PremierePro CS5.5, which has the unique and wonderful ability to play anything—all codecs, frame sizes and formats—in real time, without rendering, in the same timeline. Even if you don't want to edit the entire piece in PremierePro, and it is a surprisingly capable and easy editing application, it makes a great front end for shot selection and initial color correction, maintaining each clip's embedded metadata. Edited, color-corrected clips can be exported through Adobe Media Encoder to the codec of your choice, Dynamically Linked to Adobe After Effects, or sent to the chosen NLE via XML export.

Speaking of keeping metadata, another workflow option is to transcode clips to the Cineform codec (MSRP $299-$999), a high precision (10-bit) intermediate codec which will convert virtually any camera format, including RAW and DPX, into up to 8K resolution, 4:2:2 or 4:4:4 (:4) chroma space files, remove telecine and interlace, and provides for batch pre- or post-processing (with the included HDLink (Windows) or ReMaster (Macintosh) applications) and non-destructive metadata processing (for color correction, text and timecode imposition, and transfer of camera and lens data). The upper tier of Cineform's package also provides support for 3D camera files. The advantage of the Cineform solution is that it enables extremely high-quality editing and a very efficient, metadata-enabled workflow in a virtually lossless codec.

Spending some time planning the edit and post workflow has become an imperative in this time of diverse acquisition formats and widely divergent delivery formats. The options are many and sometimes confusing. If you keep in mind the first principle of maintaining the highest quality through the least number of transcodes throughout the process, you can certainly devise the most efficient and highest quality workflow.