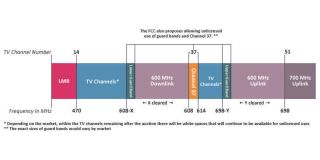 WASHINGTON -- The Federal Communications Commission launched a new website promoting its planned spectrum incentive auction that claims there will be no loss of service in the aftermath… eventually.

“Will I lose my over-the-air broadcast television?” an FAQ query poses. “No,” it states. “The incentive auction process will enhance the ability of broadcasters who remain on the air to continue providing the public with diverse, local, free over-the-air television service. However, in order to accommodate the new wireless broadband services, there may be a brief transition period. The FCC will work with broadcasters to ensure that any transition is brief and that consumers are well-informed of any potential disruptions.”

The website is part of the FCC’s Learn Everything About Reverse-Auctions Now, or “LEARN” outreach program. The site was billed as “a one-stop information resource for incentive auction stakeholders, particularly the nation’s broadcasters,” though none of the information appears to be new or particularly technical.

It mostly aggregates links to auction-related material, such as the Notice of Proposed Rulemaking and the comments file, and provides basic information on the reverse-forward design of the upcoming auction, tentatively scheduled for June of 2014. It will be the first to incorporate the two-part process in which broadcasters set their price in a reverse auction, and potential bid prices are determined in a forward auction. The auction is taking place so spectrum now occupied by TV stations can be licensed to wireless carriers for provision of broadband, as part of the 2010 National Broadband Plan.

The LEARN site features an FCC Staff Summary of the incentive auction plan that states that there are “currently 8,402 total TV stations operating in the UHF and VHF bands,” a dozen more than in the commission’s count released Jan. 11.

The summary goes on to say that the UHF channels now occupied by TV stations are “especially well-suited for mobile broadband uses.”

Though participation is voluntary, the plan presupposes the reclamation of 20 TV channels, or 120 MHz of TV spectrum. TV stations can either relinquish their licenses completely, give up a portion of their spectrum and/or share a 6 MHz assignment with another TV station. The law requires that no TV station with a UHF license be made to relocate into the VHF spectrum at Chs. 2-13, but stations can volunteer to do so.

Should the commission secure 20 channels nationwide, stations that remain on the air will be repacked into bands between Chs. 14 and 26; and 38 and 40 under the proposed plan. It also reserves two 6 MHz guard bands between broadcasting and wireless broadband spectrum for unlicensed devices. The guard bands are a point of contention with Republican lawmakers who want to see that spectrum auctioned off, even though the law they enacted specifically called for them.

That same law also states that proceeds from the forward auction of TV spectrum must cover the estimated $2 billion cost of relocating broadcasters and radio astronomy users on Ch. 37. If not, no licenses will be reassigned. The commission’s LEARN site addresses the question of insufficient broadcaster participation by saying, “We’re confident that, based on a fair assessment of the economic opportunity presented by the incentive auction, enough of them will voluntarily choose to participate to make for a successful auction.”

Federal law provides that broadcaster participation be confidential, but at least two groups have been identified as speculators. Fairfax, Va.-based OTA Broadcasting, a subsidiary of Michael Dell’s MSD Capital, has at least four stations in major markets and recently purchased an LPTV in Boston, WYCN, for $4.1 million, and WLWC, a CW affiliate in Providence, R.I., for $13.75 million. It also owns KTLN in San Francisco; KFFV and KVOS in Seattle; and WEBR in New York.

The other group, organized by former Disney lobbyist Preston Padden, is reported to have around 25 stations interested in participating in the spectrum incentive auctions.