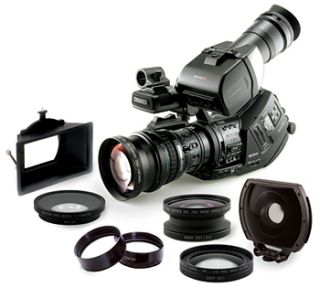 SEATTLE A TV station videographer and digital still photographer arrive at a breaking news story. The videographer grabs his camcorder and starts shooting, zooming out for wide, establishing wide shots, in for tight shots of the action.

The still photographer has lenses mounted on several digital camera bodies, plus a kit-bag with a dozen more lenses. Some are fixed focal length lenses, some zooms with modest ranges. The still photographer juggles between various cameras and lenses, each combination capable of framing just that shot he wants.

Schneider Optics recently introduced a full line of Century HD lens add-ons for Sony’s new PMW-EX3 camcorder. One could make the argument that the videographer is the lucky one; there is only one piece of equipment to keep track of, and the zoom lens lets things get pretty wide and pretty tight.

On the other hand, the videographer sometimes wants to get a little tighter on subjects that are some distance away than the camcorder's lens allows. More often, the videographer is pressed back against a wall, wishing there was some way to get just a little wider angle on a small room.

"If you're shooting in a small office or shooting in a car, you get into situations where you can't get far enough away to get the shot," said Dave Waddell, marketing manager for Fujinon. "Maybe they're doing an interview and want to get a two-shot."

A single zoom lens that would provide both very wide and very tight performance would be too bulky and too heavy for running and gunning, not to mention too weighty on the pocketbook. Fortunately, there is an array of lens attachments for extending a lens' zoom range on both the wide and tight end.

For the videographer who wants to shoot wider, there are two solutions: wide angle adapters and wide angle converters. Both of these devices attach to the front of the lens, and provide a wider field of view while transmitting the same amount of light that would have come through the lens without the attachment.

The difference between lens adapters and lens converters is their ability to maintain focus through a zoom. A wide angle adapter provides an in-focus image only at the widest end of the zoom range, where a wide angle converter maintains focus throughout the range of the zoom.

The difference between the two does not come without a price. Everything being equal, a wide angle converter weighs more and is more expensive than a wide angle adapter.

On the plus side for converters, they can be left in place on the lens while shooting shots other than at the widest end of the zoom range. On the other hand, adapters are available which achieve extremely wide angle fields of view, 160-degrees or more with a fish-eye effect. These are becoming more popular for point-of-view shots in action sports coverage.

A pair of solutions is also available to extend the telephoto range of a zoom lens, the tele-converter and tele-extender. These devices have the opposite effect on the zoom lens: they provide more telephoto effect to the zoom lens to allow a closer view of the subject, or to crop out unwanted surroundings.

Both tele-converter and tele-extender maintain focus throughout the range of the zoom lens, providing more telephoto capability at the tight end of the lens while sacrificing some wideness at the other end of the lens. But the two lens attachments are very different in the way they mount on the lens, and have other differences as well.

The tele-converter mounts on the front of the lens and transmits the same amount of light through the lens as the lens would receive without the device in place.

The tele-extender mounts between the camcorder and lens, which has a couple of effects. First, tele-extenders cannot be employed on camcorders which come with permanently attached lenses. Second, there is substantial light-loss when using a tele-extender. A 2X tele-extender, which would, for example, change the range of a 9-144mm zoom lens to 18-288mm, would also sacrifice two f/stops in light transmission.

However, tele-extenders are considerably lighter than converters. Zoom lensmakers offer tele-extenders built into many of their zoom lens products. This brings an obvious question: can a tele-converter be used on a lens that already employs a tele-extender? Yes.

YOU GET WHAT YOU PAY FOR

Browsing quickly through a camera dealer's catalog, there is an amazing range in the prices of lens attachments.

"All of our lens accessories are not the least expensive available," said Larry Thorpe, national marketing executive of the Canon USA Broadcast and Communications Division. "We build them to meet the high optical standards we set for our lenses. Our goal is not to sacrifice any of the optical quality of the original lens when employing our optical accessories."

Fujinon's Waddell echoed those thoughts with simplicity: "If [a lens accessory] is not of good quality, you're not going to get good quality pictures."

Thus a videographer trying to decide whether a lens accessory is a good value or just cheap can do a simple test: shoot some video with and without a lens attachment up for consideration. If there's no loss of sharpness, no color shift or other effect, it's worth considering. If not, it's just cheap.

The effect of high-definition on lens makers has been well documented, but it's worth noting that everything that applies to the lenses themselves applies to HD lens attachments.

"Some manufacturers use glass that really isn't designed for HD," said David Contreras, sales operation manager for Schneider Optics, a Van Nuys, Calif.-based provider of lens accessories, "and that causes them to have problems such as chromatic aberrations, and you start to see image shifts when you mount the adapter on the lens." He also pointed to the need for the kind of lens coatings that the lensmakers themselves employ to defeat light-losing reflections within their lenses.

Jeff Giordano, vice president of 16x9, a provider of lens and lens accessories in Valencia, Calif., said the company is finding fertile ground for high quality lens attachments in the new fixed lens HDV camcorders. "The quality of the pictures produced by the camcorders is wonderful, and the quality of the add-ons has to match that image quality," he said. "It takes more precise engineering and manufacturing, and that costs."

Without spending a great deal of time and space with finger pointing quotations, there is a general, if self-serving, difference of opinion as to whether a customer is better off buying a lens accessory from a lens manufacturer or from a company that specializes in accessories.

The lensmakers emphasize that they know their lenses inside and out, so they are in the best position to build adapters that match the quality of those lenses.

The lens accessory specialists counter that their experience building such devices for a whole range of lensmakers has given them the knowledge to build better lens accessories, no matter the lens they're designed for.

A smart customer will do a shoot-out to see what best matches his lens.