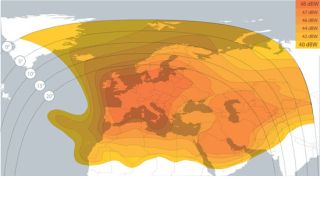 PARIS -- Eutelsat Communications announced it is launching a dedicated demonstration Ultra HD channel for Europe on the Eutelsat 10A satellite (coverage area depicted). The first transmissions of content filmed in 4K will start on Jan. 8.

Eutelsat’s new channel is designed for tose who want to acquire expertise in 4K, including production companies, pay-TV operators, rights owners and TV set manufacturers. The new channel will operate in progressive mode at 50 frames per second. It will be encoded in MPEG-4 and transmitted at 40 Mbps in four Quad HD streams. Eutelsat is partnering with ATEME, a video compression solution provider to the broadcast industry, for the transmissions that will be uplinked to the Eutelsat 10A satellite from its teleport in Rambouillet, near Paris.

Eutelsat timed the announcement concommitant with the Consumer Electronics Show, where Ultra HD is expected to be a centrepiece at the event.