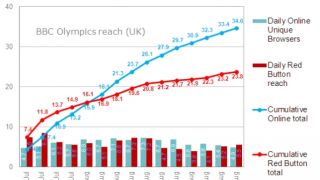 Unlike in the events themselves, records for TV viewing are easy to break during successive Olympic Games. But, in Europe, audience gains were far bigger than usual, often doubling the levels for Beijing 2008. This is partly because of the time zone factor with the games being in London, boosting live audiences, but also reflects the impact of making multiple streams available via interactive and online interactive services, so that people could watch desired events as they happened.

Not surprisingly, the BBC in the host country notched up the biggest gains, with peak audiences often triple those for Beijing, for example 20 million for the men’s 100m final, compared with 7.5 million four years earlier. Even in many other leading European countries, audiences were well up, with German public service broadcaster ZDF averaging 3.59 million viewers for its London 2012 coverage, compared with 1.81 million for Beijing, according to the European Broadcasting Union (EBU). This was despite Germany having a relatively poor Games given its population and the investment made, with a total of 11 gold medals.

In France, 34 million people watched at least an hour of the Games on France Télévisions' France 2, France 3, France 4 and France O. During the Opening Ceremony, France 2 took a 27.5 percent market share of viewing, its best for seven years, even though interest in that is always greatest in the host country.

Commercial broadcaster Eurosport, which operates across the continent sharing coverage with public networks in several countries, provided a broad measure of combined linear, online and mobile viewing of the Olympics across Europe. While Eurosport did not provide a direct comparison with Beijing 2008 given the expansion of its coverage since then to multiscreen platforms territories, it said it attracted a total audience of 106 million for London 2012. This was an 80-percent jump in overall viewing figures, and there was also a 36-percent increase in visits to its Eurosport.com web site, to 5.6 million.

The viewing peak was for the Opening Ceremony averaging at 23.4 million, or 84 percent of the total UK TV audience at that time, followed by the Closing Ceremony at 23.2 million average, or 82-percent share. The most viewed events were the men’s 100m final, watched by 20 million, followed by the 10,000 meter final (won by the UK’s Mo Farah), at 17.1 million.

The Games’ 90-percent viewing total easily broke the previous record of 81 percent set a decade ago by the 2002 Football World Cup. More recently, it also topped this year’s Diamond Jubilee celebrating the 60th anniversary of the Queen’s coronation, which drew 69 percent of the total TV audience.

The BBC had 24 simultaneous live channels available throughout the Olympics via the red button delivered through the program guides of the two leading pay TV operators, BSkyB and Virgin Media, and through the second most popular free-to-air platform, FreeSat. Users of the Freeview free to air digital platform fared better still, with an additional two extra channels in SD and one in HD.