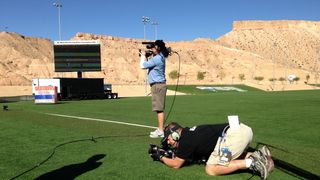 The recent broadcast of the annual RE/MAX World Long Drive Championships golf special on ESPN was noteworthy for its innovative use of virtual and analytical technology and for the cost-effective way TNDV, a mid-sized mobile production company in Nashville, worked with sports TV production company Ohlmeyer Kusserow Group (OKG) to make it happen.

Unlike many of the larger mobile companies that offer production services, TNDV specializes in providing small to mid-sized trucks that get the job done for a lot less yet still provide the sophisticated on-screen look sports producers are seeking to increase ratings.

OKG hired TNDV to deploy specialized equipment alongside its typical mutlicamera production packages that would clearly show how the golfers hit the ball and the trajectory it takes; all live with near-real time virtual effects signal processing. The unique setup included Protracer software (from ESPN Innovations) and extreme “X-MO” slow-motion cameras with built-in replay capability from a company called Inertia Unlimited (Jacksonville, VT) which has built a special housing and control interface for the Vision Research Phantom super-slow-motion camera.

For the program, which was shot on location in Mesquite, NV, and debuted Dec. 23 on ESPN, TNDV provided its Aspiration 40ft expanding side mobile production truck. Nic Dugger, president and owner of TNDV, said the Inertia Unlimited camera system enabled them to capture dramatic shots and up-close player reactions at up to 1000fps, with instantaneous live replay of super-slow-mo footage. Much of the production was shot at 700fps.

“We could capture and analyze the swing technique and style of each golfer in a much more intensive method than what is possible with traditional 30fps camera technology,” he said.

The Protracer software, used in combination with an ESPN robotic camera, provided the graphical representation with a red “Protrace” line that followed each hook, slice and straight ball path. The robotic camera uses a smaller camera head that can move left to right on a dolly track, with independent tilt and pan from remote locations. The software was able to track the golf ball as it flew through the air and represent it graphically on the screen as the camera dollied around the golfer — providing an effect similar to 3-D.

“We were able to tie in the X-MO camera with a single SMPTE hybrid fiber cable, just like the rest of our cameras, with full shading control and remote control of the extreme slow-motion replays (with a second EVS slo-mo operator dedicated to X-MO replays who was controlling the camera in the field from the truck),” Dugger said.

Viacom has booked TNDV via Viacom’s CMT channel for its new live country music program in which TNDV will send a mid-sized truck to a new venue every week this year.

“They booked us because we are small, we can load in quickly and they only need four cameras,” Dugger said. “That’s our sweet spot. Of course, we’re still doing ISO cameras, multicamera switching and signal routing, so it has to be a technologically advanced truck. However it would not make sense to book a full sized sports truck for this type of job.”

A similar bidget-conscious scenario played out for the RE/MAX World Long Drive Championships golf special. OKG is a veteran sports production company that is used to working with larger 53ft trucks with a high camera count on each project. This particular job didn't require that, so TNDV was called in to implement eight Hitachi Z-5000 HD (1080i) cameras and Fujinon HD lenses with the X-MO camera. Dugger said he had used the X-MO camera before to get B-roll, but never in a live situation.

For a show like this, we’re able to get in and set up in a matter of two hours,” Dugger said. “Adding the Protracer and X-MO technology added a bit of complexity, but we knew that with every extra hour we spent on these extra devices the production quality was going up significantly for viewers.”