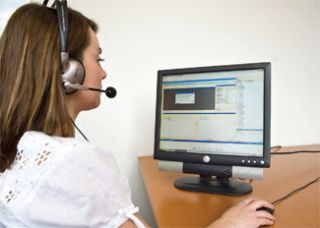 SEATTLE—February's publication of the European Broadcast Union's final requirement specifications for interoperable intercom over Internet protocol (Tech 3347), provides much more than just a way of connecting to remote intercom stations over an IP network. Intercom systems from manufacturers who comply with the standard will be able to interoperate, a valuable capability to broadcasters of large, multinational events where different OB vans and studios may have installations of intercom systems from various manufacturers.

VoIP for broadcast intercom systems has been gaining traction for years now. "It's the way of using Ethernet throughout a broadcast plant to ship around audio and control," said Clark Novak, marketing manager for Axia Audio, a division of Cleveland-based Telos Systems. "VoIP replaces the old fashioned method of discrete, hundred-pair cables and XLRs so that everything now travels on Ethernet, either 100base-T or gigabit connections, and RJ 45 connectors, CAT5 cabling."

There are several good reasons why intercom users are looking to VoIP. The first is "because IP networks often exist now, in buildings or across regions," said Volker Schüppel, head of software development at Riedel, a Wuppertal, Germany-based manufacturer of professional intercom systems. "So if you have an intercom, you don't need additional lines or additional connections to different locations, the VoIP connections become part of the operation." Even in a new building, the broadcaster's going to need an IP network run throughout the operation anyway, so it's considerably less expensive to use that network for intercom too.

Another point in favor of connecting an intercom over an IP network is that the physical connection can be very simple: just plug a common network cable, with its ubiquitous RJ45 connector, into the network. Once that's done, the intercom station is treated as a network node. "It says 'I'm here,' advertising its presence," said Novak. "It goes out and finds other stations that are out there, and constructs a database that keeps track of where all these stations are by their IP address."

Intercom manufacturers are quick to point out that while the Internet is certainly an IP network, it is not necessarily reliable enough for intercoms. "The Internet has plenty of latency," said Patrick Menard, product manager at Clear-Com in Alameda, Calif. This makes for delay in voice commands making it to the intended crew member—unacceptable on a telecast where split-second timing is critical. "In a production environment, we want our customers to be in some type of control over the network they're using."

Axia Audio is debuting its IP Intercom system at NAB this week. That said, intercom makers say their customers do connect to some remote stations over the Internet, where it's the best alternative. Intercom manufacturers have come up with latency reducing software solutions, and methods of rebuilding data packets that get lost along the great web highway. But with the Internet, "you takes your chances," as the saying goes.

Even on a private network, "Life has its complexities," said John Anderson, product marketing manager for intercom at Fairpoint, NY-based Bosch, which features RTS and Telex brands. "If you're going to be using the same data network your employees are using to download YouTube, you have to look at the bandwidth available and the real traffic. That's not to mention that the challenges of various countries and their infrastructures and how well their network really performs during the event is always a concern."

So what's the big deal with the EBU 3347 standard? Up to this point, intercom VoIP connectivity has been a proprietary matter for intercom vendors, who use their own coding and control when passing intercom data through a network. Brands X, Y and Z of intercoms can't interface with each other over a network. They need (drum roll, please), a standard.

Clair Merienne, 3347 standards group chairman EBU 3347, the VoIP intercom standard, actually follows on from EBU 3326, the Audio Contribution over IP (ACIP) Requirements for Interoperability, published in 2007. So in addition to everything else a broadcaster can do with network connectivity, he can get double duty by passing both his high-quality audio and his intercom over an IP network.

The new EBU standard only goes so far in terms of promoting interoperability, said Dave Brand, chief development officer at IntraCom Systems, LLC. "Just as two phone companies can make their phones work together because they can share dialing commands, on and off commands, ring commands and so forth, that doesn't necessarily mean they have the same feature set."

Adding extra levels of interoperability between systems may be left to intercom vendors, or to third party integrators.

So where does EBU 3347 go from here? Now that the standard has been published, intercom vendors can develop interfaces that comply with 3347. They have been working hand-in-glove with EBU on the technical requirements of the standard, so those requirements haven't been a deep dark secret. (Riedel has already announced it is compliant with 3347.)

The next step by the EBU is interoperability testing among manufacturers, said Mathias Coinchon, senior engineer with the EBU's Department of Technology & Development. "We have not organized those tests yet, as we are currently looking at the status of implementation by manufacturers," he said.

Claire Mérienne, the chairman of the 3347 standards group will be attending the 2011 NAB Show to meet manufacturers, according to Coinchon.

The upside of EBU 3347 for broadcasters can be huge. Intercom systems in OB vans and studios were interconnected over IP networks ranging across South Africa for last year's World Cup telecast. With the new standard fully implemented and tested, disparate intercom systems in different locations should be able to interoperate.