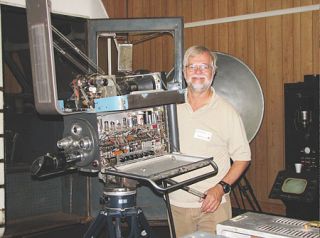 HILLIARD, OHIO—In what has become a spring ritual, aficionados of television’s technical past once again gathered here for three-days of examining restored and working relics, listening to presentations about TV pioneers and their inventions, trading stories about collections, and buying and selling television-related items to further restoration efforts or enhance collections.

Steve McVoy, founder of the Early Television Museum in Hilliard organizes the annual Early Television Foundation conference, now in its ninth year. More than 100 attended and an equipment auction netted nearly $28,000, he said.

One featured exhibit was a working drum-filter type field sequential color television receiver. The design was touted in the early 1950s as a space-saving alternative to the large filter wheel that rotated in from of a set’s black and white CRT to produce color images before the advent of the tri-color kinescope. Adjacent to the drum-filter color receiver was another very rare artifact from color television’s past—an RCA triniscope color display unit. The triniscope used three b&w CRTs optically multiplexed with mirrors and filters to provide a full color image. RCA built a small number of these units for demonstrating color television to the FCC and others. The triniscope shown at this year’s ETF conference is believed to be one of only two surviving RCA demonstration devices.

Bob Galanter demonstrated a mass spectrometer detection technology being used to locate minute air leaks in the problematic 15GP22 and other picture tubes with large glass-to-metal seals that were used in first generation color receivers.

Operation of a restored RCA image orthicon field camera by collector Chuck Pharis was another event highlight. True to early tube technology, the camera proved rather finicky, but did produce images during part of the event.

An auction of early receivers and other gear featured two rare pre-war television receivers—a five-inch Andrea and a 12-inch Dumont—as well as a one-of-a kind Zenith field sequential color developmental prototype receiver. The Zenith auctioned for $10,000, and the Andrea sold for $6,000. Bidding for the Dumont receiver failed to meet the seller’s $8,000 reserve figure.