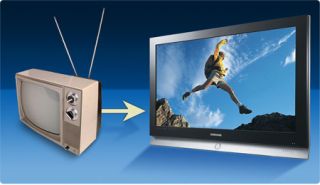 MULTIPLE CITIES: The digital TV transition continues to play out across the globe more than a year after the United States hit its deadline. The story elsewhere is much the same as it was here leading up to June 12, 2009. Millions are not yet prepared and various government officials are trying to get the word out.

The Aug. 31, 2011, Canadian transition applies to “areas with a population over 300,000,” according to the Canadian Radio-television and Telecommunications Commission. Roughly 860,000 households in urban areas are unprepared. Around 31,500 unprepared households are estimated to be in areas not required but expected to switch on Aug. 31, 2011, as well. The transition is expected to cost Canadian consumers around $73.5 million, Digital Home reports.

Japan’s transition deadline is July 24, 2011, and around 20 percent of TV households there--11 million--are unprepared, according to Asahi Shimbum (requires translation). Japan has around 48 million TV households. DTV broadcasting commenced there in late 2003 in Tokyo, Osaka and Nagoya.

More than half of households in Hong Kong are said to be receiving terrestrial digital TV transmissions, according to the government. Around 53 percent, or 1.23 million households have gone digital, up 300,00 from a year ago. DTV was launched there at the end of 2007. Hong Kong will shut down analog broadcasting in 2012. Eight more “fill-in” stations are under construction to complete coverage for the region.

More than half of the 52 countries in Africa are not expected to meet the 2015 DTV transition deadline set by the International Telecommunications Union, AllAfrica.com reports. Twenty-nine countries don’t appear to have started the process. Five have launched digital broadcasting, including South Africa and Kenya. Ten are said to be in the pilot stage; and eight have complied policies. Officials are concerned that neither broadcasters nor citizens will have adequate time to obtain the necessary equipment. Only South Africa has created a DTV converter subsidy program.
-- Deborah D. McAdams