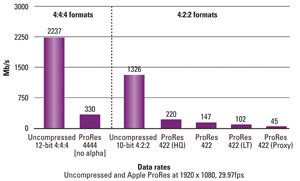 There is no doubt that we are in the midst of a rapid evolution of codec design. Traditional codecs, some might call them legacy codecs, are gaining evolutionary improvements. These codecs include HDCAM, AVC-Intra 50 and 100 as well as AVCHD 1.0. This article will, after a brief overview of AVC-Intra and ProRes 422 as well as the new sensors that drive codec evolution, focus on AVC-Ultra. There are five flavors of ProRes 422 in comparison to uncompressed video. (See Table 1.)

Although ProRes 422 codecs are 10-bit codecs, they may carry 12-bit data values. However, they vary in terms of color space and compression ratios. ProRes 4444, however, has additional functionality. The first three 4’s indicate that the codec is capable of carrying either RGB values or luminance plus two chroma components, with all three values present for each pixel. The fourth 4 indicates that an alpha value can be carried along with each pixel. When cameras record ProRes 4444, the fourth value is not present, making the data stream simply 4:4:4.

The advantage of the ProRes proxy codec is best experienced in Final Cut X. When you import any type of data, you have the option of automatically, in the background, creating a ProRes 422 or proxy version of the original file. You then edit the 4:2:2 10-/12-bit proxy video, which allows real-time editing of most any format on almost any Mac. During export, the original file is used as a source of all image data.

AVCHD has evolved to version 2, which has two new features: the ability to record at frame rates of 50fps or 60fps, and to record at 28Mb/s at these higher frame rates. To date, the AVCHD specification has not been enhanced to support Quad HD or 4K2K images. For this reason, cameras, such as the JVC HMQ10, record Quad HD in generic AVC/H.264. Using Level 5.1 or Level 5.2, 24fps or 60fps respectively can be recorded.

All codecs have a similar set of parameters. These include image resolution, image composition (single frame versus two fields), de-Bayered versus raw (progressive-only), image frame rate or field rate, color sampling (4:4:4, 4:2:2, 4:1:1 or 4:2:0), RGB versus YCrCb, compression ratio, and bit depth.

Interestingly, the number of A/D bits has no relation to a camera's dynamic range. Rather, as a camera’s A/D bit depth increases, the tonal resolution of the camera’s gray scale increases. (See Figure 1.)

Figure 1. Grayscale smoothness as a function of bit depth

Both ProRes 4444 and AVC-Ultra can provide 12-bit sample depth. Alternately, data can be converted to log values. In this case, 16 bits can be represented by only 10 bits. Thus, when looking at bit depth specifications, it’s important to know whether it’s log data.

Consider an illumination range of 18 stops. Assuming older sensor technology, at best only 12 stops can be captured by the sensor. However, these 12 stops are not all usable. Low illumination causes several stops to be lost because of high levels of noise. Likewise, at high illumination, several stops are lost due to clipping under extreme light levels. The effective dynamic range is only about six stops. (See Figure 2.)

In Figure 2, the brown diagonal line shows a perfectly linear gamma. In order for a video signal to be displayed correctly on a monitor, a nonlinear gamma must be applied to the signal from the A/D. In the HD world, it’s called Rec. 709. (Red curve.) This curve provides the video image that we are used to looking at. When video will be transferred to film, a lower contrast video image is required. (Blue curve.) The “X” marks the point where the filmic curve yields a brighter mid-tone image that reduces apparent contrast.

Consider a contemporary sensor. (See Figure 3.) The illumination range remains the same at 18 stops. The potential sensor range, however, has increased to 15 stops. Because of improved technology, fewer stops are lost to noise and bright light clipping. Thus, the sensor is able to capture a usable 12-stop dynamic range.

Once again, the brown diagonal shows a linear gamma curve, and the red curve shows Rec. 709 gamma. To record a 12-stop signal, a 12-bit codec can be employed. Alternately, some cinema cameras utilize a logarithmic gamma (green curve) that is applied to sensor data. At point “Y,” the logarithmic curve yields a brighter picture that reduces apparent contrast. Likewise, at point “Z,” the logarithmic curve yields a darker picture that also reduces apparent contrast.

This explains why a logarithmic image looks so much “flatter” than a Rec. 709 image. After log conversion, only 10 bits are required to carry the 12-stop signal range.

Today’s sophisticated sensors demand a recording system that is capable of carrying a much higher-level quality image. For this reason, Panasonic has announced AVC-Ultra. AVC-Ultra is backward compatible with AVC-Intra. That means that an AVC-Ultra decoder can decompress all of Panasonic’s P2 codecs. AVC-Ultra offers several quality levels. (See Table 3.)

Both the Class 200 and the Class 4:4:4 are intra-frame codecs. Although Panasonic has always promoted intra-frame encoding, its new AVC-LongG is an inter-frame codec. AVC-LongG enables compression of video resolutions up to 1920 x 1080 at 23.97p, 25p and 29.97p. Amazingly, 4:2:2 color sampling with 10-bit pixel depth can be recorded at data rates as low as 25Mb/s.

—Steve Mullen is the owner of DVC. He can be reached via his website at http://home.mindspring.com/~d-v-c.