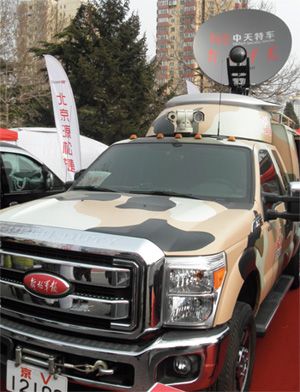 A Dodge Ram converted for ENG use sits in an outside exhibit at the 2012 CC BN in Beijing.
JOHNSTON, IOWA: As regular readers of this column know, I have spent the last 10 years or more documenting the conversion of Iowa Public Television from analog to digital. One of the first areas where we actually did our digital transition was in field production. At the end of the first year's budget we had enough money left over to purchase a couple of HDCAM systems and a first generation HD nonlinear editor from Avid. Over the years we expanded our field production systems to include five XDCAM systems, 10 HD editing systems (five Avid, five Final Cut Pro), and a six-camera HD production truck. Our mission is to capture stories about Iowa and share them with all Iowans and since most of those stories take place outside of our studios, we are committed to going to where the stories are and bringing them back.

Every year I go to the NAB Show and look at electronic field production technology to see what changes are happening and what we need to be prepared for. I talk with colleagues at commercial and non-commercial stations about what they are doing, how they are doing it and what works and what doesn't. The idea is to gain knowledge and learn from others and share knowledge that others might find useful. In March I had the opportunity to exchange ideas with a new group of colleagues while speaking at the 2012 CCBN, the China Content Broadcasting Network exhibition held in Beijing. The event is sort of a combination of NAB, IBC, SMPTE and SCTE conventions all rolled into one. Part of my tour included visits to some of the broadcast facilities in Beijing as well as time wandering the floor of the convention. I took advantage of the opportunity to look at field production and see what they were doing and how they did it. As you might expect, their field production is broken into two basic categories: news and programs.

The majority of equipment in a typical newsgathering vehicle at CC BN was familiar for any U.S. broadcaster On the news front, newsgathering seems to be done primarily via satellite, no surprise in a country the size of China. Looking into a typical newsgathering vehicle, I saw not only equipment that I am very familiar with but also brands and models that I did not know. Whether in RF and antenna control in the rear of the vehicle, or in the video operations area located in the midsection of the vehicle, I was pretty sure that I could fire up the system and make it work, even if I couldn't read Chinese. It also helped that in many cases, the Chinese word for some technical components is the English word. So it appears that for newsgathering, our methodologies are quite similar.

Production was another area of interest and I took advantage of the opportunity to look over several vehicles, large and small, and to talk with their engineers regarding operations. One very interesting rig that I went through at the convention was a newly delivered unit built by U.K. manufacturer A. Smith Gt Bentley Ltd. and is still featured on their website. The unit was labeled as an "HD unit," but while I was taking the tour they were touting and showing a 3D production of an annual music festival in Beijing. If I understood the truck engineer, the 3D production they were showing had been produced by their first 3D production truck and this was their second and was capable of being used for either 3D or HD production. Evidently 3D production in China is starting to happen and there is currently a cable-delivered 3D channel available as a test. I will be very interested to see how their experience with 3D works out as I am involved with some of the standards work that is going on within ATSC on this very same subject. As with the newsgathering vans, in virtually every OB truck I saw at the stations and at the exhibit, the production equipment was all virtually the same as we would see in any U.S. vehicle.

The larger production vehicles were equipped to do both stereo and surround sound productions. Coming from my past where I wanted to be an audio engineer for a recording studio and spent a number of years working in radio and then in television, often being the only engineer on staff that thought about audio, I am always looking at what equipment is being used. In the one large truck where I could get into the audio booth, I saw a Lawo MC¬≤66 console. Lawo is a manufacturer out of Germany of which I was unfamiliar with. I spoke at some length with an engineer in the truck but the language barrier kept me from getting any real details about the performance of the console. I am not in the market for audio consoles at this time as IPTV is very happy with our SSL's, but I wanted to try and find out what the similarities and differences are.

Overall, having briefly looked at field production in China, I was pleasantly surprised to find we have more things in common than I thought.

Bill Hayes is the director of engineering for Iowa Public TV. He can be reached via TV Technology.