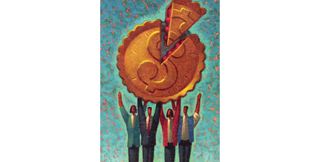 Does this mean that digital media will continue to be viewed and treated as an add-on to traditional media platforms such as radio, TV and print?

“I don’t think it will always be an add-on,” said Jeff Ulrich, senior director of digital sales strategy and training at Cox Media Group. “It was that for a long time, because existing sales staffs could sell it as an add-on. Now, digital-only players are achieving larger scale—think ReachLocal, or LocalEdge. Those companies focus on 100 percent digital solutions, but the [revenue] levels are relatively low compared to most mass media investments by advertisers.”

The difference, Ulrich said, is that there are hundreds of thousands of small and medium businesses that can’t afford traditional media can spend $500, $1,000 even $1,500 on digital platforms. “Mass media is out of their reach,” he said. “It just doesn't make sense.”

“Digital media is just a very competitive media with many companies having a lot of inventory to sell,” he said. “Digital and/or social media is a very effective way to target certain types of audiences, and is an important part of an entire media mix of advertising messages.”

However, Deker said the majority of Roll Call’s advertising is print, about 80/20—a ratio that reflects the BIA/Kelsey forecast.

“In my world—political advocacy and corporate responsibility/reputation advertising reaching Congress and the federal government—we still do the majority of our advertising in print,” Deker said. “The disparity is partially because print is relatively more expensive for reach. Our market is not on the leading edge of media since we are reaching on older demo and traditional in its media consumption; I.e., still like their print pubs.”

“What's missing here is digital services,” he added. “Most measurements of ad spending fail to count the dollars that are spent by [small and medium businesses] on SEO of their sites, or web hosting. Now add in any video that was produced, or photography.

“I think you'll see more dollars allocated to digital when we get past just measuring display ads on websites. Digital media is diversifying, and measuring what gets spent on the overall effort is a lot harder than asking four or five TV stations in 212 markets how much money they grossed last year,” Ulrich said.

Fratrik said alternatives to digital metrics are being explored.

“There are many different ways that digital media re being sold besides just impressions; cost-per-click as one example,” he said.

Deker said Roll Call has a “big-bag approach... meaning each reps sells all of our media products together and creates integrated packages. “

The BIA/Kelsey forecast has traditional local media platforms generating $109 billion in 2016, down slightly from this year’s $110.9 billion total, but an increase over the totals predicted for the next three years (. Over the same period, digital revenues are expected to increase steadily by a 12.4 percent compound annual growth rate, compared to a -0.4 percent CAGR for traditional media. That should be reason enough for media companies to keep investing in digital, Deker said.

“Media companies that do not innovate and create robust platforms now will get left behind for more active media alternatives,” he said. “Digital will continue to outpace print in year-over-year growth and will eventually overtake print spending.”

Fratrik also noted that traditional media companies are well-positioned to take advantage of digital: “Local media companies have several assets that allow them to be successful with these new digital opportunities.” E.g., a recent Scarborough study of Millennials indicates the demographic uses social media for breaking news and traditional platforms for follow-up. (See “One-Fifth of Americans Rely on Social Media for News.”)

The Scarborough study said people 18-29 rely on social media sites to find out about current events. Advertisers are taking note. BIA/Kelsey’s forecast says social media will generate $3.47 billion in local and national ad revenues this year, rising at a 28 percent CAGR to $6.26 billion in 2016.

BIA/Kelsey broke down social into display, native and mobile. Display will continue to dominate, “due in large part to Facebook’s Marketplace Ads and YouTube’s multiple display units,” the firm said. “Spending on social display advertising will increase from $3 billion in 2012 to $5.4 billion in 2016.”

The forecast also identified mobile as a key growth area for social media. BIA/Kelsey estimates social-mobile ad revenues will increase from $500 million in 2012 to $1.5 billion in 2016, a CAGR of 28.5 percent. The firm said “a variety of forces will influence this growth, including rapid social-mobile consumer usage growth, active experimentation by vendors and deep integration of native ad units on the platform.”