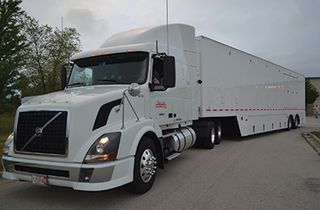 WAUNAKEE, WIS.— “Give the customers what they want”—that’s the design mantra behind Token Creek Mobile Television’s refurbished Chippewa 53-foot production truck. In order to satisfy the needs of top tier cable and regional sports networks, Chippewa was recently converted from an SD to a fully integrated HD truck.

“These broadcasters are very clear about the equipment they like in their trucks,” said John Salzwedel, Token Creek’s senior vice president of sales. “We do have some flexibility when it comes to cameras and lenses, but when it comes to the basics—these customers know what they want.

“The sports industry is demanding HD more and more these days, such that I expect SD to be basically gone in the next six months,” he added. “So we needed to convert Chippewa from SD to HD/3G, to keep this unit relevant to broadcasters’ needs.”

The truck is built around a Grass Valley Keyenne switcher with video storage/ playout/slow motion from EVS. Token Creek has three other 53-foot production trucks, including Hiawatha, Sioux, and Varsity, all of which are HD units with Grass Valley video switchers.

TRUCK’S REBIRTH
Chippewa’s rebirth doesn’t end with the transition from SD to HD. The refurbished truck is so different from its former self, that there’s literally no comparison between the two.

“We totally gutted the truck and changed the interior layout to make it more ergonomically friendly and spacious,” said Salzwedel. “We even sent the trailer out for a complete overhaul, and had it and the truck cleaned up and repainted. It’s basically a new truck.”

Chippewa’s system integration was handled by Beck Associates of Austin, Texas. This was the first time that Token Creek had contracted a truck buildout to a third-party integrator.

Chippewa’s production center is built around the Grass Valley Kayenne video switcher. “This is what our clients were expecting to see in the truck,” said Salzwedel. “It is 4-ME/75 input/48 output, with all the bells and whistles.”

Token Creek did have some wiggle room to choose cameras. “We selected Grass Valley LDK 8000 Elites, which we have on all our trucks,” said Salzwedel. “These are great cameras that deliver quality video. We can run them using Triax or fiber, with both 101mm or 88mm Fujinon zoom lenses.” The truck carries 10 Elites onboard, and is wired to support up to 12 cameras.

Chippewa’s 3G video infrastructure is built upon Cobalt Digital HPF-9000 High Power Frames. “Each of these units is only 2RU tall, yet can provide up to 360 watts of power across 10 high-power or 20 medium-power cards,” said Bob McAlpine, senior vice president of sales for Cobalt Digital. “These units are populated by cards that support HD-SDI reclocking; MADI and audio distribution amplifiers, and frame syncs.”

The HPF-9000s also house Cobalt Digital 9901-UDXHD 3G up-, down-, cross converters. These come with 16 channels of AES embedding and color correction software.

Chippewa’s 3G video infrastructure is built upon Cobalt Digital HPF-9000 High Power Frames. “We chose Cobalt because of their proven reliability, and the solid support we get from their sales and technical staff,” said Salzwedel. “We need equipment that we can count on.”

The first was time: The rebuild began in mid-August 2012, with the goal of Chippewa being ready when the 2012–2013 basketball season started in November.

“One reason we contracted Beck Associates to build Chippewa was the deadline; especially because our own engineers were busy on other projects,” said Salzwedel. “Fortunately, Fred Beck and his company came through—and went above and beyond what we asked for. You walk through the truck today, and it is so new that you wouldn’t even know it had been refurbished.”

The second hurdle was money. “Token Creek had a difficult time convincing our now ‘old bank’ to underwrite the project,” Salzwedel said. “Fortunately, Tom Spitz and his group at Settlers Bank came through for us. They have a solid grasp of our business case, and secured the financing and support we needed.”

The refurbished Chippewa’s first gig took place on Nov. 22 when it was deployed by NBC-affiliate WDIV-4 Detroit to cover the 86th annual America’s Thanksgiving Parade.

“It’s a fitting launch for the rebirth of a great truck,” said Salzwedel. “After this shoot, Chippewa will be on the road again—this time in HD!”