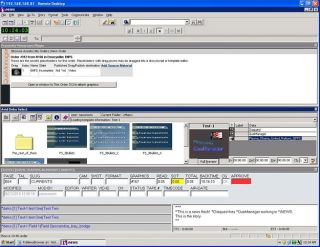 QueManager has been or will be installed in seven CMG stations and duopolies by the end of November: KTVU, San Francisco/Oakland/San Jose (DMA #6); WSB, Atlanta (DMA #8); KIRO, Seattle/Tacoma (DMA #13); WFTV/WRDQ, Orlando, Fla. (DMA #19); WPXI, Pittsburgh (DMA #23); WSOC/WAXN, Charlotte, N.C. (DMA #24); and WHIO, Dayton, Ohio (DMA #65). According to Chip Reif, engineering manager for WFTV/WRDQ, CMG plans to implement QueManager in some of its smaller stations in 2011.

Cox QueManager for iNews
With development stalled on the Artbox product years ago, CMG stations needed a new way to search its graphics library for images that would enhance its news stories. “Artbox was a product that plugged in and it worked,” said Reif. “What we really wanted was a product that would give us that same degree of reliability. As we changed from the workflow of Artbox to QueManager, no one noticed. It was that seamless.”

QueManager allows CMG producers to search thumbnails of existing graphics and attach the finished graphics to stories in Avid iNews. When used with the Deko ActiveX plug-in, producers can also add titles to a graphic, which can be updated throughout the story’s life cycle without requesting new graphics each time from the graphics department.

Producers can also place an order for a new graphic through QueManager if they cannot find an image in the archives that works for the story. While Artbox required support materials to be e-mailed to the graphic artist, QueManager allows existing graphics, notes, and other materials to be attached directly to the order.

Reif said CMG will be able to measure its return on investment (ROI) through efficiency and accuracy. He said QueManager reduces the labor required for the people who have to interact with graphics, which frees up station personnel to perform other tasks. As a result, it also has reduced spelling and other human errors.

QueManager provides a Web-based order system that can be integrated with ENPS or iNews newsroom computer systems via plug-ins. The software add-on offers easy access to the most needed tools for asset searches and browsing, as well as order requests, job assignment, review and approval, and publishing.

Diaquest is an Emeryville, Calif.-based software development firm with a focus on the video and film industries.