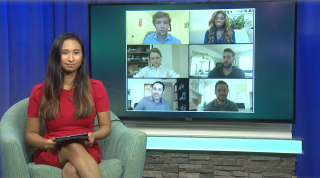 BOSTON—As the students at Boston University can tell you, it’s been quite a different college experience this year with COVID-19. From remote learning to content creation that includes social distancing and lack of equipment, the students have found innovative ways to continue their studies as well as keep the university’s TV station on the air.

Since Boston University switched to online learning in March, its TV station hasn’t missed a step. Malaika Moyer, general manager of student-run BUTV10 and a senior in the Communications (COM) program, said the station has continued producing content with the help of the COM engineering staff and the dedication of its members.

“From the start, BUTV10’s Student Management Board (SMB) knew we wanted to continue producing remotely, so we coordinated and organized next steps with all 30 of BUTV10’s producers (constituting 14 shows),” she said. “While not every show was in the position to continue remote production, those that were met virtually with their writers, crew and talent to continue their production plan. So far, we’ve been able to air 10 remotely produced episodes and specials.

“Two news shows, ‘On That Point’ and ‘Government Center,’ collaborated to create a special virtual series named ‘Pandemic Perspective,’ which explored the national and the international impact of COVID-19 on college students, and examined different governments’ responses to the pandemic,” she said. BUTV10 also produced a virtual panel event featuring some of the university’s most successful alumni who offered this year’s graduating class valuable advice in navigating the communication industry.

Zoom and other video-conferencing applications have become the new norm for many when producing content. “We now have a host on one channel and the guests on another, as well as a director in a different location who is switching between the different channels,” Losseau said. “It requires a lot of preparation, from technical rehearsals to script rundown, a whole technical team and producing team, as well as effective communication between every team member to make sure everyone is on the same page about the type of content that we are all looking to distribute.”

Moyer agreed with Losseau on the use of Zoom, but said the team was ready to try something new. “In June, we produced two in-studio episodes for our alumni Q&A series ‘2020 Vision.’ This was a special project that we had planned since March as a gift to the class of 2020.”

Working in the studio was a student who served as the host and a faculty advisor who remained across the room. Three of COM’s engineers were staged in different control rooms as the crew. BUTV10’s studios are large enough that they were all able to maintain a safe distance from each other and operate equipment from their designated spaces.

“We carefully planned for that,” Moyer said, “and will use it as one model for social-distanced production once we return to campus.”

Many students had TV/film projects in progress when BU shut down, sending students home. It’s been challenging for them to complete projects with little or no equipment, wearing masks and/or social distancing.

“Since quarantine began, I’ve produced a 12-minute news feature about affordable housing in Brookline,” said graduate student Kristen Chin. She has also started filming a documentary and been working as a production intern at WGBH since June for their lifestyles production department, Studio 6.

Chin said she was lucky she had almost finished shooting the affordable housing feature, so that piece was mostly unaffected by the quarantine. The documentary project has been slightly more challenging.

“I started shooting my subject, Joe, in May. Joe and I wear masks and practice social distancing whenever we meet. Joe is a carpenter and one of our first shoots was of him fixing someone’s porch. He was wearing a mask, although he generally prefers not to when he’s doing a job outside and can distance himself from a client. I had attached a wireless mic to his shirt and realized later that the mask actually muffled his voice, making the audio unusable.”

She now tries to film him in situations where he’s outside and doesn’t need to wear a mask or speak to a client. So far her zoom lenses have allowed her to stay a safe distance away. As for her internship at WGBH, she works from home, which hinders her working directly with the staff and learning how WGBH operates as a whole.

Without the equipment and other students from BU, junior Jiaxin (Jack) Tong has had to improvise. “For shooting, I used my iPhone XS Max as the camera and microphone,” he said, “and I had my roommate hold the phone while I played the only character in the film.” He adapted his scripts in order to remain at his apartment and used apartment lights and table lamps as background lighting.

“Fortunately, I figured out a way with tech staff [support] to use Avid on my Macbook Pro for editing. For the two film projects, I changed the two topics to make them more practical to accomplish,” said Tong. “For example, the topic for the nonfictional project was recording my life and my inner feelings under the pandemic. This arrangement made my project more practical with the limited equipment I had.

Junior O’Neil Henry served as a remote sound mixer with BUTV10’s first pandemic broadcast “From a Distance: BUTV10 Variety Hour.” “Since we’ve started learning remotely we have not been doing [our usual] work and have had to shift focuses to be more digitally centered. For my cinematography and lighting courses, we used a previsualization software to work on lighting techniques,” he said.

Henry said he was talking to a professor about COVID-19 creating limitations for students and the projects they were working on. The professor responded with the thought that as a filmmaker, it is not those limitations constraining creativity. In fact, sometimes it is the limitation that makes one become more creative.

On the same topic, Moyer said, “Interestingly, I think the content we’ve produced remotely has been some of our best. Everyone needed to be more creative—to think outside the box—to make these productions possible. Our content was strong, and our guests and interviews were fantastic.”