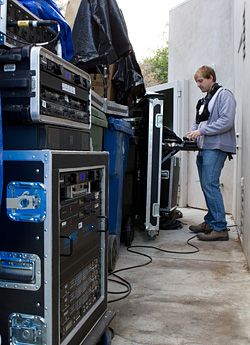 LOS ANGELES: MTV’S is using Clear-Com gear for the hidden-camera show, Punk’d.” Clear-Com’s Eclipse-PiCo digital matrix intercom, V-Series user control panels and Encore partyline as well as Optocore interfaces V3R-FX-Intercom and X6R-FX-I intercom, are being employed in the production of the season that started airing March 29.

During pre-show preparation and while in production, the director, executive producer, backup producers, video engineer, hidden camera operator and audio technicians utilize the Eclipse V-Series panels to communicate with one another. The director provides cues for the talents, who are using hidden microphones and IFB earpieces, while coordinating with the producers and camera crew on two-way radios and Encore RS-603 wired beltpacks.

The V3R and X6R provide a high-speed interface for the Clear-Com system along with all other audio network circuits via fiber and CAT5, permitting centralized management of the distribution network. The Optocore interfaces also allowed fast, intelligent routing of audio, data, video and intercom signals over the integrated systems in real-time with the added benefits of dual-fiber redundancy, ultra-low latency, and high bandwidth. This solution decreased the number of cables required to link the voice communication systems.