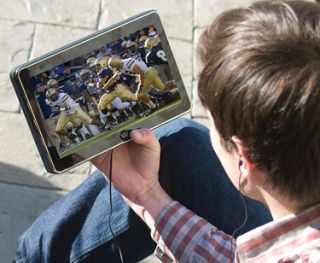 Video of all types will comprise more than half of all data sent over the consumer Internet by the end of 2012, according to Cisco, which made this and other predictions in its annual Visual Networking Index forecast. Overall annual global Internet traffic will reach the zettabyte threshold by the end of 2015 (a zettabyte is a unit of information or computer storage equal to one sextillion—1 followed by 21 zeros).

Global IP traffic has increased eightfold since 2006 and will increase fourfold over the next five years, Cisco said. The company—one of the world’s largest providers of Internet routing technology— has, in the past, touted video as the “killer app” of the Internet and its latest report continues to bear that out. In 2010, Internet video surpassed P2P as the largest source of Internet video traffic at 40 percent, and will reach 62 percent by the end of 2012. The sum of all types of video, including TV, VOD, streaming and P2P will continue to be approximately 90 percent of global consumer traffic by 2015. By then, it’s expected that 1 million video minutes—the equivalent of 674 days—will traverse the Internet every second.

Internet video to TV (so called “over the top”) will increase 17-fold by 2015 and will comprise over 16 percent of consumer Internet video traffic by 2015, according to the report. VOD traffic by then will be equivalent to 3 billion DVDs per month. Currently much of this comes from Netflix’ streaming service, which, according to a recent report, represents nearly one third of all Internet download traffic. HD video on demand will surpass standard definition by the end of 2011 and by 2015, HD video will comprise 77 percent of VOD.

Much of the growth in Internet video is being driven by faster broadband speeds, increased broadband deployment worldwide and more and varied connected devices, including tablets, smartphones and connected TVs. In 2010 PCs generated 97 percent of consumer Internet traffic and this will fall to 87 percent by 2015. Mobile broadband traffic will increase 26 times from 2010 to 2015, to 6.3 exabytes per month.

By 2015, more than 40 percent of the world’s population—3 billion—will be connected to the Internet. The global online video community will increase by approximately 500 million users by 2015, up from more than 1 billion Internet video users in 2010. By 2015, the Asia-Pacific region will generate the most IP traffic, surpassing North America for the top spot. The Middle East and Africa will be the fastest growing IP traffic regions over the next four years.

Cisco said it validates the data in its annual report with actual traffic data provided voluntarily by global service providers and consumers alike. A white paper on the report is available here.