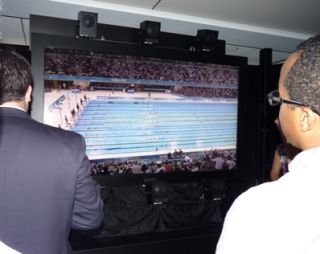 SONOMA, CALIF.—The main lobbying group for the U.S. consumer electronics industry this week voted to define the next generation of so-called “4K” high-definition display technology for the home as “Ultra High-Definition” or “Ultra-HD.”

In August, NBC Universal and Comcast demonstrated the London Olympics in Ultra-HD at its Washington D.C., headquarters. The Consumer Electronics Association defines Ultra-HD as “giant-screen TVs with more than eight million pixels of resolution and four times the resolution of today’s high-definition televisions” (1080p) . The association’s Board of Industry Leaders unanimously voted to endorse the consensus opinion of CEA’s “4K” Working Group recommending the term “Ultra High-Definition” and related performance attributes. The name and related minimum performance characteristics are designed to help consumers and retailers understand the attributes of this next generation of superior television and display technology beginning to roll out this fall. The vote came during the Board’s meeting at CEA’s annual CEO Summit and Board Retreat held here through Friday.

The Working Group, now known as the CEA Ultra HD Working Group, was formed earlier this year to bring a wide array of stakeholders together to discuss how best to define and educate consumers about this new technology. In May, the International Telecommunication Union (ITU) announced a recommendation for quality standards in connection with the development of ultra high-definition television (UHDTV). While there is a scarcity of UHDTV content currently available, broadcast and production markets are working on distribution schemes that would most likely originate with physical media such as Blu-ray. Japan broadcaster NHK, a pioneer in the development of the format, announced last summer that it could begin broadcasting UHDTV in that country as soon as 2016.

“Ultra HD is the next natural step forward in display technologies, offering consumers an incredibly immersive viewing experience with outstanding new levels of picture quality,” said Gary Shapiro, president and CEO, CEA. “This new terminology and the recommended attributes will help consumers navigate the marketplace to find the TV that best meets their needs.”

The group also defined the core characteristics of Ultra High-Definition TVs, monitors and projectors for the home. Minimum performance attributes include display resolution of at least eight million active pixels, with at least 3,840 horizontally and at least 2,160 vertically. Displays will have an aspect ratio with width to height of at least 16:9. To use the Ultra HD label, display products will require at least one digital input capable of carrying and presenting native 4K format video from this input at full 3,840 X 2,160 resolution without relying solely on up-converting.

“Under CEA’s leadership, the Ultra HD Working Group spent the majority of the summer meeting and discussing how to bring this technology to market,” said CEA Ultra HD Working Group Chairman Gary Yacoubian, president and CEO of Specialty Technology/SVS. “We discussed and debated two important steps, the name and recommended attributes, in a forum that allowed a variety of key stakeholders, manufacturers, retailers, broadcasters and Hollywood professionals to lend their voices. As we educate and raise awareness among consumers, I look forward to working with our robust committee to pave the way for a successful rollout of Ultra HD.”

“TVs remain highly sought after and were the second most frequently mentioned device on consumer wish lists this holiday season, behind only tablets,” said Shapiro. “There has never been a greater time to be a consumer of televisions and displays. You can select from a wide array of choices offering outstanding high-definition picture quality, an amazing 3D experience, and interconnectivity within and outside of the home. And now we are proud to present Ultra HD for those consumers who want tomorrow’s next-generation of displays and televisions, today.”

Ultra HD technology is expected to be prominently displayed at the upcoming 2013 International CES, Jan. 8-11, 2013, in Las Vegas.